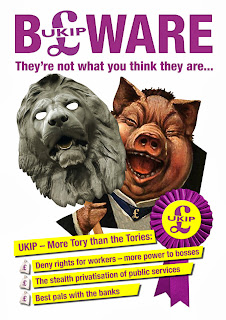 Or perhaps they thought that nobody would notice!
Posted by Junius at 14:46

UKIP in Lincs breakdown but "Outside our immediate Lincolnshire community nobody is even aware of the dispute."

I think it was only their turn coat Peer and at the tyime Party leader Malcolm Lord pearson, who has clearly not read the manifesto.

In fact he didn't6 even know his party's aim was to oppose the Tories against whom he urged a number of UKIP candidates to stand down!

That also was not in the manifesto - though I see it is now mooted by7 Nigel Farage clearly his sad puppet Tim Acker has no say as Policy Director just as Will Gilpin was sabotaged by bad leadership and bad practice!