> Steve Crowther Should 'Count the Paperclips'! 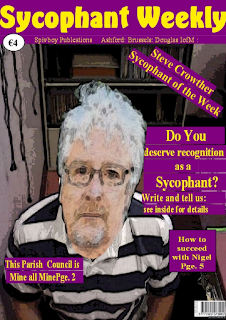 In the political context, UKIP often refer to the issue of the EU as 'The elephant in the room'.

Now, in the context of UKIP, its constant internal strife, and litany of incompetence, an MEP has raised the matter of another elephant in the room. Disgraced (at least for the moment) Godfrey Bloom has turned his fire on Party Secretary Steve Crowther.

The independent MEP, who is still a UKIP member, and who contrary to what the press were told here in the UK is still a member of the far-right EFD group in the European Parliament, said he felt there was "no future for me" in Ukip after the party chairman, Steve Crowther, publicly criticised him for advocating "radical" policies.

"Clearly there's no future for me in the party when the chairman, an ex-LibDem who believes he should have an interest in policy and not count the paperclips which is what he was employed to do, now feels he is entitled to criticise me when I talk about radical or libertarian policies, it's something I simply don't tolerate."

Crowther has repeatedly demonstrated his total lack of political acumen, and an absence of any ability in the field of policy. Some might argue that this makes him perfect for the job, as he will fit in alongside so many others posessing similar ineptitude.

Described by one MEP recently as a "nauseating little shit", Crowther has one quality that ensures that he has at least a temporary future in UKIP - a brown nose.


Read the original here.
Posted by Junius at 11:41