How we laughed when we heard about last Monday's East Midlands meeting! The new committee decided to ask Derek a few awkward questions regarding his not so illustrious career as an MEP. 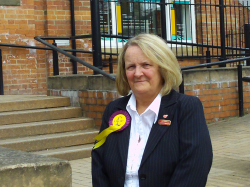 Derek was asked why he had donated so little money to the region since becoming an MEP. He was also asked why he had lied to the committee about the OLAF investigation. Mr and Mrs Ransome took this rather badly and stormed out of the meeting. They were quickly followed by Derek!

It comes as no surprise that Clark was unwilling to defend himself against the charges brought him. For how can you defend lies, greed and dishonesty?

Chris Pain is the new regional chairman for the East Midlands. He replaces the incompetent and dishonest Clark.

dare one ask why this liar has not faced a UKIP disciplinary panel and been publicly censured both for his owiginal fraudulent misuse of public funds, an action which resulted in Tom wise being sentenced to 2 years in prison.

I presume the British Police are still deliberating now that OLAF declared his guilt and ordered the return of the money.

Many will recall the length of time taken to incarcerate Tom Wise for his thefts.

From the point of view of any serious political party I believe that the lies to his regional committee, his electorate and the public are far more concerning not to mention his dishonest claim,s relative to myself and those at Junius.

However a general malodour of corruption and dishonesty, lies and fantasising amongst the incredibly low calliber of leadership team and its claque in UKIP is all pervasive.

From the outright lies of Nigel Farage to the drunken stupidities of Bloom, Farage and others to the perversion of its press officer some much boasted of, to the lies and cheating and defamatory dishonesty of Mick McGough and UKIP's claque of sock puppets let loose dishonestly to savage anyone who dares to disagree with corruption and seeks to expose it in UKIP.

Clearly UKIP in their present state are not only unfit for purpose but unarguably no part of the solution but a very large part of the problem relative to The EU and the popular aim to Leave-The-EU.

Despite the liberal dishonest claims, distortions and lies of McGough, Douglas Denny, Stuart Parr and many others in UKIP's claque they have utterly failed to identify a single solitary accidental, let alone deliberate, lie or misleading statement as made in context and of consequence on a single solitary posting ever made by myself or those at Junius.

UKIP however and particularly its leadership and claque have a long string of criminality in office and dishonesty with many attempts to defame founded on lies.

What exactly is UKIP for other than aiding The EU helping The Tories and enriching a small clique who protect themselves from exposure with public money handed out as bribes (hardly salaries) to a rather unpleasant claquie of degenerates unwilling even to speak out against the corruption for fear of losing their positions!

British politics? No I think we can put this down to their masters in The EU as they have so few representatives elected in British politics with less than 30 seats of relevance out of the 19,500 available by election!