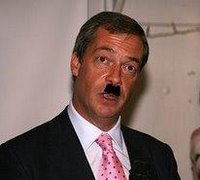 From The Centre of European Politics:


UKIP has always denied any alliance with the extreme right but here we have the evidence. Godfrey Bloom MEP has set up a transnational party with the French National Front, Austrian Freedom Party, and Flemish Interest.

The European Alliance for Freedom (www.eurallfree.org) received just under € 373,000 from the EU budget under the EU party statute in 2011:

The Alliance’s President is Godfrey Bloom, while other board members include MEPs from the Austrian Freedom Party and the Flemish extreme right. The French National Front has revealed that both UKIP and Marine Le Pen are members of the Alliance:

Here is a translation into English from the National Front’s press release of 27 January 2012 – note the last sentence of the second paragraph:

‘Marine Le Pen will visit Vienna this Friday 27 January at the invitation of the Austrian Freedom Party (FPÖ) and the European Alliance for Freedom (EAF). She will meet various political figures as well as the leaders of patriotic movements in Europe. She will then proceed to the Austrian National Assembly where she will be received by one its presidents as well as by the parliamentary group of the FPÖ.

‘Marine Le Pen joined the European Alliance for Freedom last October. This pan-European platform was founded at the end of 2010 and despite its opposition to the European Union such as it is organised at present, has been recognised by the European Parliament. The members of this Alliance have come from the ranks of those movements engaged in the patriotic and sovereignty struggles of our time. They include for example the Austrian FPÖ of Heinz-Christian Strache, the British UKIP of Nigel Farage, as well as other movements coming from Sweden, Flanders, Malta and elsewhere in the future.

‘The day will conclude with Marine Le Pen attending a ball at the Hofburg Imperial Palace in Vienna at the invitation of Heinz-Christian Strache, president of the FPÖ.’

If further proof of the EAF's far right politics were needed here we have a Flemish poster from its website showing a white sheep expelling a Turkish and Moroccan sheep from Flanders:

Clearly UKIP has some explaining to do. Perhaps the BBC and British political class should apply the same cordon sanitaire to UKIP as applies to the BNP. Should a party that forms transnational alliances with Marine Le Pen and the Austrian Freedom Party not be ostracised?

To read the original: LINK
Posted by Junius at 08:46

Here is my comment on the web site of C.o.EU.P.

surely no one believes UKIP rhetoric that it is NOT racist, anti Jewish, anti homosexual, self serving, self obsessed, bullying, corrupt and dishonest if not in all aspects at very least by its close associations.

Let us not forget that its only notable politician the media performer Nigel Farage leads The EFD Group in The EU which is not even in favour of withdrawal but in favour of reform of The EU!

Then again is it reasonable to define Farage as leader when he so clearly lacks strategy, tactics or vision and UKIP is very much under his control as a one man band rather than led by him.
To be fair Farage has put UKIP where it is but in doing so has fallen out with almost half his MEPs and despite placing individuals on his NEC has had some spectacular rows in removing those who slipped through and then demanded transparency and accountability, probity and ethics from his management claque.

Perhaps if UKIP is ever to have a meaningful future now is the time for Farage – also a failed banker – to follow the example of Bob Diamond & The Barclays Bank Chairman and fall on his sword.

Even partyed from his money stream as leader Farage would still have a role to play where he at least shows some ability as an entertainer and media bufoon!

I rather think that the Tories and their press helots are keeping their powder dry on UKIP's strange friends for the impending European elections.