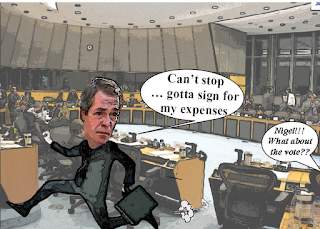 Here are some words of wisdom from The Telegraph regarding this false dawn:

Don Farage squares up to the EU windmills

Sorry, but it isn’t going to happen. In 1983 the SDP were going to break the mould of British politics; they didn’t. In 1989 the Greens were going to transform the British political landscape; they couldn’t. And in 2015 the great Ukip breakthrough will disintegrate upon the unyielding wall of electoral reality.

This morning the Tweed Army are on a roll. They are surging in Rotherham on the back of the fostering scandal. As this paper reports today, no fewer than eight Tory MPs are said to be in discussion with Sir Stewart Wheeler about possible defection. And opinion poll after opinion poll shows Ukip snapping furiously at the heels of the flatlining Liberal Democrats.

It’s a false dawn. However noble their cause, or steely their resolve, Nigel Farage and his irregulars are marching towards defeat.

Ukip are not a political force, but a political curiosity. In years to come many a pub quiz trophy will be won by those who can correctly answer the question: “What was the name of the guy who ran the anti-EU party? Begins with an N."

In life there are rules. What goes up will come down. The Earth rotates around the Sun, not vice versa. And come election time, minor British political parties get squeezed out of existence.

Of course, come June 2014, when next year's European votes are counted, there’s going to be a whole lot of muting going on. Ukip will be in the process of recording their greatest ever election triumph. The Tories will have been beaten into a humiliating third place. Eurosceptic MPs will be fanning out across the airways demanding action and the summary execution of Ken Clarke.

And then nothing will happen. A year later Ukip will run, they will fight and they will lose. There will be no Ukip MPs. Their impact on sitting Tory MPs will have been negligible. They will have 3 or at a stretch 4 per cent of the vote to show for their efforts.

How can my cold, Leftist eyes penetrate the political crystal ball so clearly? Well, for one thing, I’m not a Ukip supporter, so I’m unencumbered by the hope and expectation attending several of those currently predicting a national outbreak of Farage Mania.

The truth, if you care to look for it, is out there. Firstly, there is the electoral system. Ukip cannot make a breakthrough in 2015 because the system they will be fighting under has been specifically designed to prevent them from making that breakthrough. It was not built to further the political ambitions of free spirits such as Citizen Farage. It was created to crush them underfoot; and so it will.

Then there is the second big problem facing Nigel Farage’s party: he hasn’t got one. In relative terms, Ukip have no money, no infrastructure and no activists. They have no organisational expertise, no strategy expertise and no policy expertise. Yes, they punch above their weight in the media, but that’s because much of the media is instinctively sympathetic to their agenda, not because of any presentational acumen. Not so long ago Ukip’s idea of a communications strategy was to wind up Robert Kilroy-Silk and let him go.

Then there is a third obstacle. Ukip are a single-issue organisation, campaigning on an issue most voters couldn’t care less about. According to Mori’s latest issue tracker, only 5 per cent of voters regard Europe as one of the most important issues facing the country. At the time of the 1997 election that figure stood at 43 per cent. Ukip aren’t surfing a wave, they’re paddling in a rock pool watching the tide go out.

People can spend the next couple of years preparing with mounting excitement for Ukip’s moment. But come the next election, the fix will be in. That tiny percentage of voters who rate Europe as the defining issue will have a clear choice. The EurowaryEurophile – if not fully obsessive – Prime Minister Miliband. Nigel Farage – no debate, no money, no activists, no infrastructure, no hope of a seat, never mind power – won’t get a look-in.

That’s the problem with being a lone warrior. It’s lonely.

History will prove you wrong. Times are changing.

Chris you would be astonished at the incredible percentage of times history has proved me right in my predictions - almost without failure UKIP leadership has betrayed the electorate in pursuit of self interest & self enrichment.

Time and time again UKIP has lived down to the very worst expectations. So consistent have they been in their failure they have lied, cherated, abused, blackmailed and defamed to try to prevent me telling the truth about them on blogs, Forums & face to face.

Team Junius have had the same low lifes and ne'er do wells making the same comments and endless people have been defamed, attacked & bullied in the belief they may be part of that team who value UKIP and wish to see it cleaned up and made fit for purpose - do you see ANY progress of note?

In the last 6 by elections UKIP has struggled to obtain 3.3% of the electorates votes as the public have stayed away in droves to register their opprobrium by absence rather than turn out to cast a protest vote for UKIP.

Much of what little gain UKIP can claim is seemingly from their fellow travelers of The BNP & other racist groups as their popularity dwindles by turn.

What makes you think 'Times are changing' and 'History will prove us wrong'? There are no signs to support your asserion on UKIP's horizon as also rans in a two party state, vassals of The EU law makers!

Perhaps you could support your argument by naming a single solitary representative of UKIP of any stature or probity, they haven't got a leader of abi9lity, a flow of cash just an elderly professional gambler who has spent most of his winnings from spread betting, no organisational skills, no framework, no strategy, no tactics and sadly it would seem just a continuation of their past with no future either.

In 20 years UKIP has, out of some 19,500 seats available by election, under 30 seats of any note - no MPs, no consequential Councillors, no PCCs, no Mayors, no Assembly Members in Wales, Scotland or London and a risible rag tag of parasites employed for praising the glorious performing monkey for lack of an organ grinder.

Just what justifies your foolhardy assertion?

For around 2,000 accurate, cross referenced, linked, substantiated and factually honest comments and predictions over many years - when you have studied the track record of Team Junius over some 4 years se the material from some 15 years at:
http://UKIP-vs-EUkip.com

Pray tell on what track record do you make your claims?