> UKIP Fail To Turn Up For Work - Again! 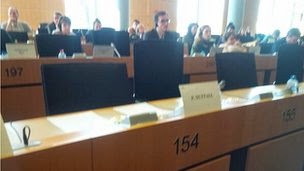 Members of the European Parliament environment committee have been voting on plans to charge US, Indian and Chinese airlines a levy for every flight to or from the EU.

Up until now they've had an exemption from the Emissions Trading Scheme.

But they knew retaliation was threatened. The US Congress has already passed a resolution condemning the scheme.

The Chinese are likely to respond most harshly to the levy. Already they have frozen orders for 27 Airbus A330 aircraft, and an order for 150 more was due to be confirmed at the end of the month.

Four-thousand jobs rely directly on Airbus manufacture at Filton, and thousands more in sub-contractors across the south of England. These are high value engineering jobs, which rely on a healthy forward order book from around the world.

When it came to a decision, many on the committee argued to end the exemption, to ensure a level playing field on environmental measures.

But British Conservatives opposed the measure and had thought they had the edge.

Then they realised UKIP deputy leader Paul Nuttall was not present, and that one vote decided it.

South West Tory MEP Julie Girling furiously tweeted "UKIP empty chair at votes on aviation ETS. Lost by 1. Hundreds of thousands of jobs now at risk #useless UKIP" and posted this picture of the place at the committee table where Paul Nuttall should have been.

She later added "They talk a lot about defending British jobs and sticking up for the South West, but when it came down to it they couldn't be bothered to turn up and vote."

A UKIP spokesman later denied that was the case, saying Paul Nuttall would have voted but was mis-informed by EU officials.

"Paul Nuttall, the MEP for this committee, was not informed by the member of staff monitoring this committee, else he would have attended and voted against these punitive charges."

The party said that South East and South West members were not able to replace him.

"Both Nigel Farage and the Earl of Dartmouth are not members of this committee and so were not in possession of the timetable of votes. However had they been aware of the importance of this vote they would have attended as substitute members if Mr Nuttall had not been available.

"We will make sure we vote against this measure when it comes to plenary, unlike the Lib Dems and Labour."
Posted by Junius at 08:44