Another potential UKIP MEP waiting in the wings? - Questions that Patrick O'Flynn and Nigel Farage must answer 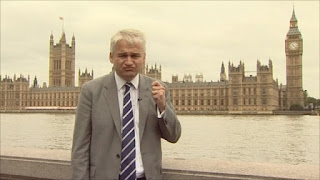 Heading for Brussels as a member of Nigel's EUKIP Gravy Train?

Patrick O'Flynn - chief political correspondent for the Express - has been the subject of some interesting discussions recently. His coverage of Farage has been laudatory to say the least. Indeed, he appears to be falling over himself to present Nigel in the most glowing terms - LINK - He even spoke at the UKIP conference!

Sources close to Farage have told us that O'Flynn has been offered a lead MEP position by Farage in exchange for a pro-Farage/UKIP line. We can confirm that Farage has met O'Flynn. The MEP lists have also been discussed.

Would Mr O'Flynn care to comment on this? And would Nigel like to confirm or deny the offer of a MEP seat to O'Flynn? And is O'Flynn's boss at the Express aware of these allegations and the fact that O'Flynn's supposed impartiality has been seriously brought into question?

This is not the first time Farage has been accused of offering an MEP seat to a journalist. Here is an interesting article by Michael Crick of Channel 4. The video that accompanies the original article is also most interesting. Farage's discomfort can clearly be seen. Nigel is not a very good liar! You will need to click on the link at the end of Crick's article to view it.

In my Channel 4 News report from South Shields last night I was unable to include a series of exchanges I had with Nigel Farage about the controversial former News of the World journalist Paul McMullan, who has frequently in public defended the use of phone hacking.

Mr McMullan had planned to stand as a Ukip candidate in tomorrow’s election in Kent, but then, three weeks ago, the party’s national executive committee barred him from standing. McMullan is now standing as an independent tomorrow, under the slogan “Save Village Pubs” (he’s a pub landlord himself).

I first noticed Paul McMullan’s connection with Ukip when I spotted him at the party’s spring conference in Exeter on 23 March, and I even mentioned his presence in my report from Exeter on C4 News that night. McMullan claimed not only to have joined Ukip, but also that he had been appointed press officer of the party’s local branch in Dover and Deal.

Mr McMullan told me yesterday that while he was in Exeter that weekend, Nigel Farage actually encouraged him to put his name forward as a Ukip candidate, not for the council elections, but for the European elections next year, and the Westminster general election in 2015. McMullan recalls Farage saying: “Marvellous. Go and get the forms filled in,” and encouraging him to join the recruitment process for Ukip candidates.

Yesterday afternoon in South Shields, I put to Nigel Farage Paul McMullan’s claim that the Ukip leader had actually urged him to stand for election. It was an example, I suggested, that the party didn’t know what it was doing. Farage vehemently said he didn’t remember any such conversation. “I don’t recall saying anything to Mr McMullan about him being a candidate.”

Paul McMullan says that he had two personal connections with Farage. He says the Ukip leader was a friend of his older brother in Kent, and also his former father-in-law, whose funeral Farage attended. “I like Nigel Farage very much,” says McMullan. He was the sole reason I joined Ukip, and why I wanted to stand. I joined Ukip because of him. I’m not sure I’ve said anything bad about Ukip, and I still think they make a lot of sense.”

McMullan was subsequently picked as a Ukip candidate for the council elections tomorrow, but then the Ukip high command heard about it, intervened and quickly axed him. “There was a feeling that his candidacy for Ukip would be a distratction as he’d be the story rather than the party,” the Ukip executive chairman Steve Crowther says. Ukip feared their 55 other candidates in Kent would be “overshadowed by Mr McMullan’s personality”. Paul McMullan has described the decision as being “stabbed in the back with a rusty blade”.

If Nigel Farage did encourage McMullan to become a Ukip candidate, it was a highly questionable judgement by the Ukip leader. McMullan has frequently appeared in the media in the last few years defending the use of phone-hacking, both at the News of the World, and elsewhere. “I see nothing wrong with it at all,” he says. “I’d happily hack your phone if I’d got something that suggesting you were doing something against the public interest, like being in the pay of one of the political parties.”

It’s all very curious. One man’s word against another. Nigel Farage against Paul McMullan. Not an easy choice.