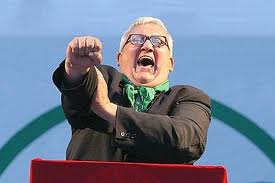 And so Farage's friend and colleague in the EDF group - of which Farage is president - has launched a vitriolic attack on Italy's first black minister.

• "This is a bonga bonga government.”
• “Kyenge wants to impose her tribal traditions from the Congo."
• "You can't say the word '******' in Italy, only think it"
• "She seems like a great housekeeper, but not a government minister."
• “(Mario Balotelli is) not a minister. He kicks a ball and that's fine if someone from Congo or Africa wants to do that.”
• "Africans are different. They belong to an ethnicity much different from ours. They haven't produced great genes."

And what did Farage have to say? Nothing!

It's no different when Borghezio praised mass murderer Breivik. Farage did nothing! See: LINK

Sorry Nigel, but the days of the media ignoring your racist bedfellows is over. The media spotlight is now firmly upon you. You're going to have to explain why you are still prepared to sit with this man and others like him. And the same goes for all those other UKIP MEPs in the group!

Many good men and women now represent UKIP as councillors. Chris Pain is one such example - a man of integrity and patriotism. Farage's willingness to sit with fascists like Mario Borghezio can and will damage their reputations in the UK. We can't allow this to happen!

It's time for UKIPPERS to demand answers from Farage. Just why are you still willing to sit with a man who praises mass murder and refers to blacks as n*ggers! Is getting more money as part of a group - plus the ego boosting title of president - more important than the reputation of the party and your members?

From the Gazzetta del Sud:

A member of the European Parliament from the xenophobic Northern League party on Tuesday made racist comments about Italy's first black minister, Cecile Kyenge. "This is a bonga bonga government, they want to change birthright citizenship laws and Kyenge wants to impose her tribal traditions from the Congo," said Mario Borghezio in an interview with Italian Radio 24. A 48-year-old doctor who was born in the Democratic Republic of Congo, Kyenge was sworn in Sunday as integration minister in the left-right coalition government of Premier Enrico Letta. When asked if he considered Kyenge an Italian, Borghezio said, "The country is what it is, and the laws are made of crap". "You can't say the word 'nigger' in Italy, only think it," Borghezio added. "Pretty soon you won't even be able to say illegal immigrant - you'll have to say 'your excellence'. "She seems like a great housekeeper, but not a government minister". When asked about Mario Balotelli, Italy's star soccer player with African roots, Borghezio said, "he's not a minister. He kicks a ball and that's fine if someone from Congo or Africa wants to do that. "Africans are different. They belong to an ethnicity much different from ours. They haven't produced great genes. Enough consulting these Mickey Mouse encyclopedias. "Kyenge is a doctor. We gave her position in a state-run facility that should have gone to an Italian".

To read the original: LINK
Posted by Junius at 12:56