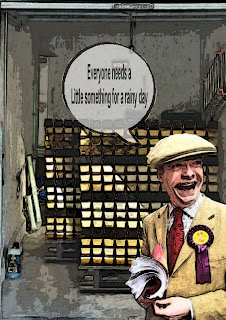 An excellent article that exposes the hypocrisy of Nigel Farage. His claim to have lost his receipts is a truly pathetic excuse. And he's fooling no-one. So what about all the other times he failed to publish his allowances? Did he 'lose' the receipts for those? He clearly has much to hide!

Farage has the nerve to condemn the EU but is more than happy to 'employ' his wife using EU money. So what does she do for the £25,000 plus? No-one knows for Farage refuses to provide details. And yet he has the cheek in the article to claim that he is not 'feathering' the Farage nest by employing her! So why is he employing her? Did he ever advertise the job that she is supposedly doing? The answer is no. And let us not forget that this EU money is British taxpayers money. 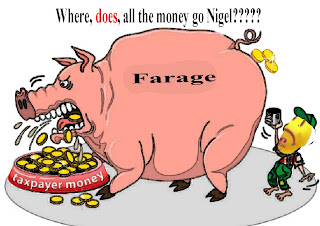 From This is Kent:

UKIP leader only MEP to not publish allowances

THE ever-vocal UKIP leader Nigel Farage, from Downe, is the only Member of the European Parliament in the South East who has not published his full allowances.

MEPs do not have to publish allowance details by European law, but the region's nine other MEPs have chosen to do so. 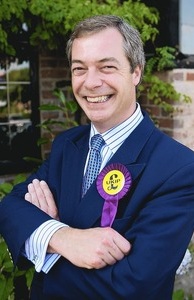 ​
Nigel Farage: Laughing all the way to the bank

In a statement from Mr Farage's office, a spokesman said the details had not been put online because the receipts had been "lost somewhere in transportation" between Mr Farage and his accountant.

The last set of accounts he published, detailing his trips to the European Parliament, dates back to June 2010.

Mr Farage, who employs wife Kirsten on a salary of more than £25,000, funded by the taxpayer, insisted there was "no feathering of nests".

Stridently anti-EU in his views, Mr Farage said: "Nothing about the EU gives value for money to Britain.

"I may be paid more than an MP but my constituency is bigger than many countries in the EU and there is no 'feathering of nests' in the Farage household, I can assure you."

In a Kent survey conducted by our investigations editor Stuart Woledge to see how well people knew their MEPs, only three in 100 people identified Mr Farage.

To read the original: LINK
Posted by Junius at 22:41

can we make a point of remembering that the money stolen by UKIP MEPs to fund their wives, mistresses and other indulgences such as Race Hate and bullying is OUR MONEY not EU money, not just a slush fund, not tax payers' money but yours and mine - stolen from us by a corrupt taxation system funding an unprincipled EU scam with ZERO democratic legitimacy.

The EU experiment is dead in the water and slowly sinking - like the Titanic holed and taking on water with an inevitable outcome but the music plays on!

it has been made abundantly clear to UKIP that NO ONE in Britain wants yet another idiotic little party of posseurs and pratts - hence their consistently abysmal showing in the elections for domestic seats.

It has also been clearly shown that in EU politics the public have some hunger for both a dusbin for failed politicians and protest votes but more significantly they want representation in The EU to expose the corruption and work to Leave-The-EU.

Sadly UKIP Leadership has failed on virtually all counts as all but one MEP has gone to the EU and wallowed in the corruption supporting the behaviour of Farage and his clique the claque of fools clamour on!

You ask if the job Kirsten is paid almost £30K a year for was advertised - it is widely believed the frequency of the interviews in various holtel rooms was in fact an underlying reason for the creation of her status as an employee rather than merely Farage's wife!

Thus many would argue that the tax payers' YOU AND I are in fact paying some £30K a year to fund Farage's sexual incontinence!