UKIP Wales spokesman responds to criticism in the usual way 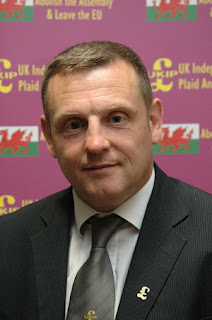 Andrew Edwards is well known to UKIPPERS as the author of a series of emails highlighting hypocrisy and corruption in UKIP. A recent email (see below) dealt with Godfrey Bloom's willingness to sit with far-right MEPs in the pan-European EAF (European Alliance for Freedom).

It generated the following response from a UKIP Wales spokesman:

Fuck off and get a life you sad boring little wanker

Would Kevin Mahoney care to comment on whether such responses are now considered the norm from UKIP Wales? We note that he has declined to comment on the fact that Bloom now sits alongside the leader of the French National Front  in the EAF.

And what of the fact that John Bufton - unlike Nikki Sinclaire, Mike Nattrass and Trevor Colman - is happy to sit alongside assorted fascists in the EFD group? Silence can only be taken as approval.

Here is the text of Mr Edward's email:

Is Bloom planning on usurping Farage's dominance in Brussels?  A somewhat tongue in cheek question of course, as we all know that Farage would not permit any such thing to happen.

So what's really behind Bloom's increasingly Europhile actions?  Why is he so eager to be publicly associated with the EU's pan-EU political parties?  After all, being touted as the, 'President' of the 'European Alliance for Freedom' (EAF), is hardly something that would go unnoticed:

The treasurer of the EAF, Franz Obermayr, is a member of the Austrian right wing party - the Freedom Party of Austria.

Note: As Barbara Booker has pointed out: Franz  Obermayr was photographed last year standing alongside French National Front leaders Jean-Marie Le Pen and Bruno Gollnisch when, with Philip Claeys, Adam Walker of the BNP and others, they visited a Japanese shrine that honours convicted war criminals.

Another Austrian Freedom Party MEP, Andreas Mölzer, is an EAF Board Member.

Torsten Groß of German Far Right Party 'Citizens in anger' (BIW) is another EAF Board Member.

Isn't it time that both Farage and Bloom were asked to justify their love-fest with EU politicians, who were they British, would be banned from membership of Ukip, and called fascist???

Clearly, and by their own stated position as, 'liberal politicians', both are guilty of bringing the party into disrepute by associating so closely with 'extremists'.  Seems to me Farage and Bloom have no issue with ultra right politics, and only pretend to do so here in the UK to gain some sort of political advantage.

For some  of pan-EU parties, in relation to Ukip, may I commend to you the comments of Barbara Booker - view via the link below (Prof Congdon especially take note):