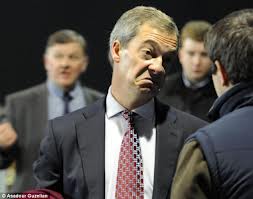 I'll do anything for publicity. Can I claim that Winston Churchill learnt it all from my Grandfather?

So Cameron has finally succumbed to pressure from his own party and promised an IN/OUT referendum on Britain's membership of the EU ....... if the Tories get re-elected. And about time!

And who do you think is claiming credit for Cameron's u-turn? Nigel Farage, that's who! What arrogance! Farage has been an MEP since 1999 and has advanced the anti-EU cause not one inch in all that time! Mind you, Farage has been good at lining his own pockets thanks to the EU! Indeed, he's now a very rich man thanks to the very thing that he claims to hate!

Last year, Cameron was rattled by his backbench revolt over the EU - LINK. Our readers will remember that the debate was as a direct consequence of Nikki Sinclaire's referendum campaign - LINK

Nigel, who was it who collected 220,000 signatures, forced a debate in the Commons, and provoked a back-bench revolt, all of which required great effort and some financial cost?

Nigel, words actually count for little unless they are backed up with deeds. So where were you when all this was happening? Making speeches in Brussels that no one was listening to, getting drunk in bars, claiming huge sums in EU expenses, etc, etc.

Sorry Nigel, but you had nothing to do with it! You even declined to sign Nikki's petition until you were confronted by her in London. And only because the media were filming you! And that was after the original petition was handed in to Number 10! 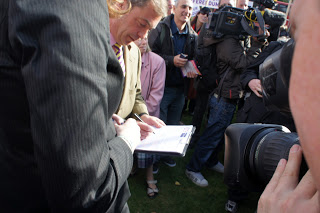 Let us not forget that Farage even told members not to sign Nikki's petition because it was a waste of time! Indeed, two UKIP MEPs admitted that they had been instructed not to sign it!

And do you remember UKIP's own feeble and half-hearted attempt at raising a petition? It achieved nothing - apart, that is, from an expenditure of a substantial six figure sum. Now where did that money go? Nigel, can you enlighten us?

We now see that the Daily Express is also claiming credit for the referendum! Laughable!