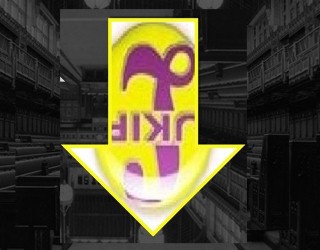 An average of 3.3 % of the vote in the last twelve by-elections.

NO MPs in Westminster. Olly Neville pointed this out - along with his support for gay marriage - and got the push.

NO members in the Welsh Assembly.

NO members in the Scottish Parliament.

NO members in the London Assembly.

NO elected mayors or police chiefs.

No members in the Northern Irish Assembly.

Lead by an MEP based in Brussels.

The only party to be reliant on the EU for financial survival.

UKIP as the UK's third party? Don't make us laugh! No wonder David Cameron rejected Farage's demand for a place in the cabinet in exchange for UKIP supporting the Tories! Nigel was hoping to keep that one quiet! Sorry Nigel, but certain Tories couldn't resist telling us!

The facts: you, alongside that petty little man Richard North are read by a few thousand people at most. You are the sad little shits with an axe to grind. Ah, did you get booted out of the party & want to vent your spleen. It would be interesting if it wasn't so pathetic. Grow up sonny boy!

Nope, I have no connection to UKIP, I just find your ranting ridiculous & wished to say so. I think you'll be in for a big shock at the next election. Where will that leave you twats then, eh?

Such a shame about RN as he is very well informed about many topics. But until he stops his bile against Farage I refuse to read him. His "Harrogate" mob are all one dimensional idiots if they think they can gain any ground in the UK. I presume they won't put any potential MP's forward as they won't get a seat, not even in Harrogate.

I also see you make it very difficult in making a comment, why no anonymous? Is that because you don't want to hear what others have to say really? That makes sense to me now.

Thus speaks a Farage sycophant! Foul-mouthed and lacking even the intelligence to refute the clear facts in this blog post. Nuff said!

I note the cowarly input of 'Stackpool' little wonder a man so bereft of ideas and factual data seeks to hide his foul mouthed idiocy behind an assumed name.

I note his lack of facts to back his childish rant.

The facts: you, alongside that petty little man Richard North

Failing, it seems, to realise that Dr. Richard North has been in continuous employment, is a recognised Government Policy Wonk, is quoted regularly and writes often for the MSM and is the author of numerous books on a wide range of subjects.

Richard's blog is recognised as one of the most inciteful blogs on politics and military matters with an extensive professional following.

Much like the fools & cowards who seek to defame me with claims that my many blogs are factually inaccurate, yet are unable to cite a single solitary material error of fact!

Thus demeaning themselves as they show they and their party to be dishonest and corrupt.