UKIP and the EU Referendum: The hypocrisy of Nigel Farage 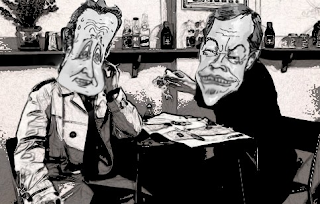 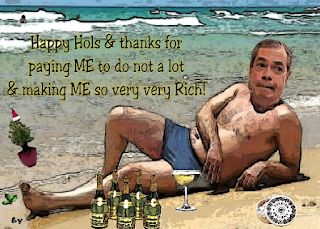 It seems that the UKIP press office's traditional fondness for unnecessary commas is as strong as ever, but even without the 5 commas, the first sentence of this press release is appalling. This is not the way to impress journalists, chaps!
But if you want to really give the editors a good laugh, what you do is you send out your press release, and then follow it up with an amendment 30 minutes later.
Here is the original.......
The genie is out of the bottle
Responding to David Cameron’s speech this morning, that offered an In/Out referendum that takes place, after the 2015 parliamentary elections, conditional on negotiations with the EU to reclaim powers, Nigel Farage MEP, the UKIP leader said,
“What the PM said today has defined the national debate about our place in the European Union. No longer can the case for British withdrawal be confined to the margins. The genie is out of the bottle”.
He went on to say,
“Whilst UKIP, regards todays speech as its greatest achievement to date, the real work for our party has only just begun”.
“The PM has made clear his commitment to the EU Single Market, which will now become the rallying point for the old establishment in this country. Our job will be to point out that argument for the Single Market, is just the same as one used for the Common Market years ago”.
We will campaign for a trade deal with Europe, to cooperate and to be good neighbours but we do not want membership of a political union”.

"UKIP Leader Nigel Farage also questioned whether Mr Cameron was completely devoted to taking powers back from Europe or whether his pledge was merely a ploy for election votes.

Farage continued: "If Mr Cameron was really serious about renegotiation, then he would invoke Article 50 of the Lisbon Treaty, which is the only mechanism that exists within the treaties to take powers back.

"If he did that ... I will take him seriously, but really I think all he is trying to do is to kick the can down the road and get Ukip off his back."

Aside from the grossly amateurish way in which this was presented to the press, this raises questions about Farage's commitment to a referendum. So he wants the Prime Minister to invoke Article 50 before the British people have had their say in a referendum? And note the way he claims credit for Cameron's announcement on a referendum. Hypocrite!