Why does Nigel Farage put up with Christopher Monckton? Many people have asked the question. Monckton is a largely discredited fantasist, so why does he remain in the upper echelons of UKIP? Let us speculate...

Monckton is an'expert' for the Heartland Institute, a US based lobbying group that presents itself as think tank. Climate change denial is one of the institute's specialities, although it's so-called experts concentrate their efforts on questioning legitimate science without presenting anything of their own.

There is, of course, big money behind the Heartland Institute - oil company money.

Heartland received $736,500 from Exxon Mobil between 1998 and 2006, although it no longer discloses funding details largely due to negative attention fron the press. The institute's own figures suggest that other oil, gas, and energy companies donated $260,000 in 2007.

So now we may have a clue as to why Farage puts up with Monckton. Is largesse the motive for UKIP MEP's climate change denial speeches and articles? 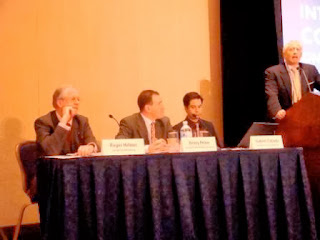 Another Heartland Institute 'expert' is Chris Horner, of the Competitive Enterprise Institute (CEI), which is another recipient of Exxon Mobil funding. Horner's involvement with CEI's euro-offshoot, the European Enterprise, brought UKIP MEPs and saffers into his orbit. Horner was a guest speaker at a climate change denial conference in the European Parliament hosted by Roger Helmer. Helmer has spoken alongside Horner at other events.

Iain Murray is also to be found at the CEI. It was Murray who wrote UKIP's statement rebbuting the IPCC. In 2004, the only year for which information is available, the CEI paid Murray $65,000. Let us be clear about this: this is oil industry money, being paid to an 'expert' to write policy statements for poltical parties. None of this is illegal, of course, but it certainly brings into serious question the integrity of those policies.

The Heartland Institute and the CEI have another common policy interest, tobacco. Philip Morris have been major donors to CEI over the years. In 1994 one of their 'experts' wrote "Perhaps, in the fine tradition of civil disobedience championed by Thoreau, we should even think of smoking as a civic duty,".

If that sounds strange, a paper published by the Heartland Institute yesterday (Nov 11th)  states:
"Nicotine’s beneficial effects include correcting problems with concentration, attention and memory, as well as improving symptoms of mood impairments. Keeping such disabilities at bay right now can be much stronger motivation to continue using nicotine than any threats of diseases that may strike years and years in the future."

Guess what? Philip Morris have also been pumping big bucks into the Heartland Institute!

A few years ago, UKIP MEP Godfrey Bloom was ordered to cancel a conference questioning the detrimental effects of passive smoking in the European Parliament after allegations that tobacco industry money was behind the event.

We could go into more detail here, but that is for investigative journalists to do.
Posted by Junius at 10:08