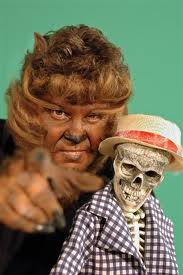 Don't Vote for Me!


The odious Paul Nuttall MEP joins Wolfman McGough for a photo shoot to commemorate Mick's stunning failure to get elected to the London Assembly. LINK

We note that the usual serial idiots and failures have been seeking to attack Junius and GLW via the British Democracy Forum. It comes as no surprise that Mick 'wolfman' McGough has emerged from the sewers to make further wild claims about GLW being in the pay of secret forces.

We all know that the Wolfman is solely motivated by a desire to please Farage and thus become an MEP. But he really shouldn't judge others based on his own greed and lack of ethics.

McGough's limited intelligence will prevent him from grasping the following:

GLW loves his country and hates the EU.

He wants to see UKIP reformed and freed from corruption.

He wants to see UKIP prosper under a leader untainted by scandal.

He wants to live in a Britain free of the EU.

It may surprise McGough but many people - unlike Batten's former bag carrier - are motivated solely by patriotism and not a desire to enrich themselves at the expense of the EU and UK taxpayer.

Ian Gillman - former UKIP activist, NEC member and MEP candidate - had this to say in response to the bearded one's ramblings:

Evidently from your highly moral writings you would never, ever; become "dependant on the puppet masters cheque" to quote your own fine words.

Excellant, we have finally (after much searching) found the man we sought for so long, one with moral fibre who will stand with us against potential fraud and theft and actually DO something for the members and former members ( most of whom are/were of pensionoble age remember) who gave of so much.

I tried my best at NEC level and Regional Committee level and with members who I thought might support me; but to no avail. Now we have you.

I gather that along with your colleague Mr Andrew Smith ( he of the Electoral Commissioners case and certain er E-mails.....ahem.....) you may have signed cheques for the party and therefore have intimate knowledge regarding many matters that may have mystery attached to them. May I say without prejudice to your efforts.

Therefore would you with all of your professional acumen and guarantees from regulatory bodies regarding your competence please supply seperate audited accounts for the following please.

Ashford Call Centre / with contract between A.C.C. and Ashford Employment Ltd.Explanation regarding the bank statements being sent not to UKIP H.Q. RBS account but to a private home. A bungalow away from the call centre bank regulatory area, thus disguising certain matters.

12 / 13 National Prize Draws under The Lotteries Act. Explanation regarding the tickets/monies being sent to a private business address not to Birmingham H.Q. but in London ! Mrs Kirsten Farage may assist you here.

£ 250,000 going somewhere claiming to be for a referendum /street collection of names. We only had a grotty A4 piece of paper, a photocopy as our 'share' . Odd, your fine mind may conclude.

£ 11,000 needing identifying as sent to" The metric Martyers" of Sunderland.

2005 National Conference , we had to pay twice for the entry/conference booklet. The second time only in cash and no change was given, we were told no change available when proffering £ 20 notes or similar.

"Trickledown" the concept whereby the first years membership of new members went to their branch. ? Yes Michael ? What happened to mine over the years?

You have already been asked for details of contracts between Soverign Draw Ltd. / a commercial address in Barrow-in-Furness/UKIP H.Q. RBS account/several directors from Scarborough to Devon . Please supply with interim accounts copies of all contracts linking UKIP/Sovereign Draw Ltd. and any other company used to transfer monies around.

Accounts for any offshore account used to receive/transfer UKIP monies.

Accounts for any Isle of Man company or trust used to receive UKIP monies.

I will pause for now , but upon receipt of the above we will no doubt have questions and perhaps a few more requests to make of you.

Thank you for your kind attention, and always remember the words of The Father of Tradgedy, Aeschylus; 525-456 B.C. " For somehow this is tyranny's disease, to trust no friends".

We await McGough's response with interest!
Posted by Junius at 08:47

it does rather look as if several £Millions of the money stolen for the public purse and doled out as bribes to UKIP politicians and possibly the same again raised directly from supporters has been at worst trousered and at best squandered.

When will UKIP stop showboating, squabbling, posturing and basing the defence of their catastrophic failure in UK domestic politics on ad hominem attacks on its supporters who dare to criticise tyheir utter incompetence, total lack of transparency and the clear signs of self serving greed and mediocracy amongst its leadership clique and their claque.

Clearly I could not make the commentsabout myself that Junius team have made but in mild embarrassment and gratitude for the clarification I can confirm them!

I have only EVER posted in support of the core aim of UKIP towards the aim of Leave-The-EU, that sadly this has involvedexposing corruption, dishonesty, lies, self serving, incompetence, fraud and outright theft in the ranks of UKIP leadership clique was NEVER going to make me popular with the low lifes I have exposed, along with a very few other honest men and women who have had the integrity to speak out.

I predict6ed with accuracy the catastrophic outcome of the last general election and also UKIP's catastrophic result with 9 out of 4,987 available seats won in the local elections.

I predicted UKIP was going nowhere and was unfit for purpose and have been proved 100% right.

Further I have been lied about, lied to, defamed and attacked for stating the truth again and again. In association with UKIP clearly patriotism, effort and the truth are feared and reveiled!

Unless UKIP has a RADICAL clean-up with resignations of almost all its dishonest, corrupt, indollent, self serving parasites in its leadership clique and their claque they have no meaningful role in British politics as the British people have so voted again and again in domestic politics.

UKIP in its present form is an excrecence doing great harm to the EUroSceptic cause of many of its genuine and ill informed members.

That UKIP has recruited amongst naiive and ambitious nobodies, children on the make who with the encouragement of one adult will take on the world whether right or wrong and the elderly who have seen the slide from dignity of Britain whilst they brought6 up the present breed of self interested political nebishes of today!

UKIP must grow up, clean up and start to do some work or fold its tent, admitting it has abjectly failed, and leave the field open for a truely valid EUroRealist force to emerge.

Having a small claque of cowards and filth posturing to protect the rotten core of UKIP is NOT politics I respect, condone or am prepared to collude with - UKIP would seem to be utterly bereft of any of the great values of these United Kingdoms and little wonder that all it can find are failed city clerks, professional gamblers and the rejects of other parties to espouse its cause and suck the life blood out of Patriotism.

Surely UKIP in its self interest and greed must realise what damage they are doing to our Country - do they care or are they as many have claimed merely a buffer invented by the EU to bring EUroScepticism into disrepute?