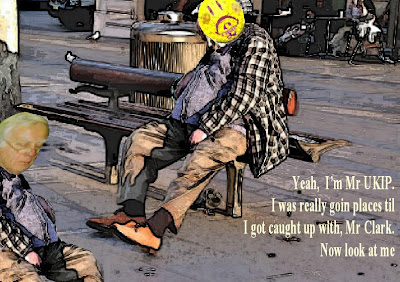 Derek is probably the most useless of all UKIP's MEPs. Under his ‘leadership’ the East Midlands has all but collapsed.

The East Midlands was one of the jewels in UKIP's crown.

Years of Derek Clark's incompetence has led to this......

The region has just 700 members and hardly any active branches.

In Brussels, you will often find him asleep at his desk. And that is about as animated as he gets nowadays.

The latest example of the Derek's incompetence is illustrated by his failure to do anything about Derek Evans.

But who is Derek Evans?

He is the Chairman of UKIP North Notts. Evans backed Farage during the recent leadership election, the usual Farage sycophant with all the charm and intelligence of a dead rat.
He has recently accused Gerard Batten of sexual harassing Paula Daly, who used to work in Gerard's office. Indeed, Mr Evans has told several UKIPPERS in the East Midlands that she left Gerard's employment because of his constant pestering.

We can confirm that Mr Evan's allegations are entirely without foundation. Ms Daly left Gerard's employment because she was finding travelling from the East Midlands to London rather tiresome.

Formal complaints were made to Derek Clark about Evans and his lies. Clark promised to deal with it. He did nothing.

We can confirm that letters of complaint have now been sent to Steve Crowther - UKIP's joke Executive Chairman- about Evans and his attempt to blacken Gerard's name in the East Midlands. Calls have also been made for Clark to stand down as Regional Chairman and as an MEP.
It remains to be seen if Crowther will act and bring Evans before a disciplinary committee. Clark must also face questioning for failing to act on the original complaints.
But as Evans and Clark are Farage sycophants we very much doubt that anything will be done. Farage hates Batten for supporting Congdon during the leadership election and welcomes anything that may damage London's only UKIP MEP.
More on Clark

Clark has been under investigation by the EU’s anti-fraud body OLAF. It is claimed that Derek Clark used EP money to employ a person (Andrew Fear) who worked as a membership officer for UKIP in the party headquarters in Devon and did no work for Clark as an MEP. This would appear to be against EU expenses rules.