UKIP: The Letter that Nigel Farage didn't want you to see 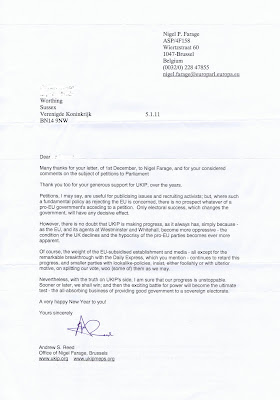 It is interesting to note that the UKIP party website includes a call to support a campaign for a referendum on EU membership. Farage has also been quick to jump on the bandwagon, especially if he can use the issue to get his face into the press.

But the truth of UKIP's position is slightly different. In private, Farage's office is less than optimistic about the chances of success as a result of any referendum, as this letter, which has been widely distributed to the press, proves.

"Petitions, I may say, are useful for publicising issues and recruiting activists; but, where such a a fundamental policy as rejecting the EU is concerned, there is no prospect whatever of a pro-EU government's accceding to a petition." So there we have it - UKIP does not really believe in its own policies, apparently.

"No prospect whatever" of a referendum achieving anything, according to the office of Nigel Farage MEP. This is another example of the supreme hypocrisy of the UKIP leadership, and one which may prove to be the Fuhrer's downfall.

(The wisdom of allowing such a poorly written letter to go out to a constituent must also surely be called into question.)
Posted by Junius at 15:38

Er Junius, the letter doesn't say what you claim.

It says that petitioning the government to try and get a referundum is not likely to be successful. Something we all know to be patently true since the Europhile Cameron has no intention of allowing such a referendum.

But nowhere does the latter claim that a referendum would not be successful. I am confused as to why you should make this claim when the leter is there for all to read?

I'd stick to turning Tricks if I were you!

Perhaps you had not notice to ensure accuracy, fairness and clarity both Junius and I published the letter for the media and members to make up their own conclusion.

The entire implication of the letter and you will know Farage is loyal to anyone who is no challenge to him and prepared to lie and cheat on his behalf - The implication is a clear renunciation of referenda.

You will note that in the 18 years of UKIP's abject failure in Britain NEVER ONCE has UKIP held a Petition or an attempt to gain a Referendum.

I do accept they have run a few scams to make money and garner addresses but NOT ONE Petition has EVER been completed though Farage, Lott & Croucher were given £250,000 to hold one but they never did - nor did they ever account for the tax payers money!

I believe that it is clear Farage does not believe in Referenda - whatever his letter stated.

However I'm sure there are still some members who with the letter in front of them have the intelligence not to need a PR Company to explain it!