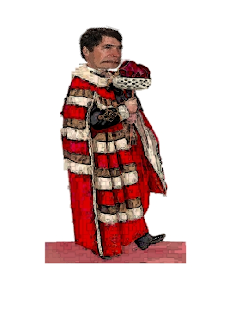 Readers of this blog may recall that Farage has long expressed a desire to place his backside on the read leather in the House of Lords.

The news that the Lords may be replaced by an elected Upper House - Senate - has Nigel positively slavering at the mouth like one of Pavlov's dogs!

Extract from The Telegraph:

Nigel Farage, the leader of the UK Independence Party, both indicated they would consider standing for an elected Upper House.

Mr Farage said he expected the use of proportional representation suggested his party would do well in elections to the Senate.

“This could be very good for us as party,” he said. “But is Lords reform in the interests of the country at a time like this? Absolutely not.”

To read the full article: LINK

It may not be in the interests of the country but that won't stop Farage seeking to get a place on the UK's latest proposed gravy train.

As an MEP he has claimed over £2 million in expenses. He also employs his wife using EU money and is set to get a massive EU pension when he finally stands down as an MEP.

Remember when he said he would publish a list of all his expenses?

And remember the promise to start a fund for all those who had suffered at the hands of the EU?

He soon forgot those promises, didn’t he?

Farage has done very, very well out of the EU. Why would he want to derail it?

It is about time UKIPPERS realised this. UKIP is simply a vehicle to satisfy his greed and desire for personal advancement. 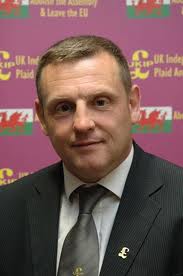 Kevin Mahoney was one of two UKIPPERS elected in the recent council elections in Wales. Some Welsh UKIPPERS have now suggested that he should replace John Bufton as lead MEP candidate in 2014. Bufton is now out of favour with Farage, plus he has health problems.

Mr Mahoney may have ambitions to represent UKIP in Brussels - ambitions that are sadly not matched by any signs of intellect on his part. For instance, here is an example of how he responds to criticism from a political opponent:

"Fuck off and get a life you sad boring little wanker". LINK

It should be remembered Mahoney will need the support of Farage if he wants a place on the EU Gravy Train. And Farage was reported to be less than pleased when he read Mahoney's comments on the UKIP Members Forum:

Given that apparently a report examining and damning just 167 expense claims from 2004 is now about to be released.

Isn't it about time that the scandal of our own UKIP MEPs hiding their expense claims with that 'Insult to the intelligence' expense template that they concocted and publish on the MEP's website is scrapped and replaced with a full and frank display of every penny that they claim?

Apart from the very obvious fact that they should have openly declared every penny claimed since first being elected the only rational conclusion to be reached from the insult that is their current partially obscured expense claim pages is that our MEPs en-bloc are trying to hide the scale of their claims.

Lets at last try and display a touch of honesty and transparency from those who appear to have taken the cash but are not so keen to openly display how much!

To be honest I feel that each and every UKIP MEP who agreed to adopt the travesty of the current expense declaration template in use at present should hang their heads in shame and not be allowed to stand again on a UKIP ticket in my opinion! 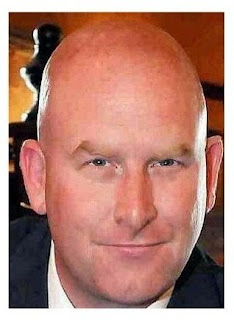 The odious Paul Nuttall got rather worked up after hearing the news that Eurocrats were having a good time using our money. Europe Day was the cause for celebration.

"How dare the Eurocrats party on down to nightclub sounds, free concerts and cookery displays when so many are suffering.


"The European Parliament is boasting of Laughter Yoga sessions which describes itself as not needing, 'a sense of humour, no funny jokes or comedy programmes - just a willingness to laugh'. How appropriate. The Eurocrats are laughing at us, quite literally, at our expense. These people are like the ancien regime, they have learnt nothing from the past few years.

"They carry on in their insulated bubble, divorced from reality, pretending that all is well behind their subsidised walls. It is a disgrace, but reveals the contempt with which they hold the populations of the European Union."

The words 'pot calling the kettle black' do rather spring to mind when hearing this. This is the same man who has been heard to boast in Brussels about how much money he has earned since becoming an MEP. Hypocrite!