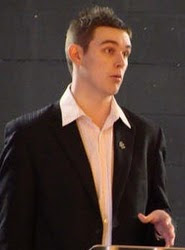 Every so often, the Farage Jugend movement is relaunched with a new chairman, which brings us to one Micheal Heaver, a London-based student.

Heaver maintains his own blog - something that the not yet quite fully educated should avoid doing, as this can come back to haunt them when they grow up. Heaver uses his blog to espouse his federalist sentiments, coming out in support of the EU's regionalisation policy. "Lets radically cut the number of British MPs in Westminster and have fully federal system..."

Heaver's call for the number of Westminster MPs to be cut echoes his Fuhrer's own wishes: In February 2008, Farage also called for a radical cut in the number of MPs, "because more laws were being made in Europe."

In tandem with this cut in the numbers of UK parliamentarians, Farage also supports the move towards a pan-European political party. The engagement in Euro elections of these PEPs will lead to the creation of 25 new 'super constituencies', to be fought over exclusively by the PEPs, and here we get to the real reason for Farage's enthusiasm. Under the party list system, anybody heading a PEP list would be virtually guaranteed a seat in the European Parliament. That is why Farage is so keen - he wants a job for life in Brussels. Farage sees the writing on the wall for UKIP, and he wants a safe berth.

Unsurprisingly, Heaver also supports the idea of UKIP joining a PEP, but as his blog illustrates, he doesn't really know why. Unfortunately for UKIP's budding young Baldur von Schirach, the fuhrer finds him irritating, so what UKIP does or does not do might turn out to be purely academic for him personally.

We should also mention that Heaver's blog recently published a statement from Tim Congdon in which the professor expressed his support for Farage following Marta Andreasen's call for the UKIP leader to step down. It was quickly removed after allegations were made that it been cobbled together from two separate emails (one of which dated from the time of Farage's re-election as leader and therefore had nothing to do with Andreasen's demand that Farage should go). Heaver was accused of having done this in order to deliberately mislead UKIPPERS..
Posted by Junius at 15:47

an unpleasant little ingrate - Michael Heavers is no exampl;e one would wish other children to follow - untrustworthy, duplicitous, underhand and dishonest.

His performances on You tube show a remarkably unpleasant child willing to mimic and ingratiate himself for his own gain.

Very limited and childish attempts at political ideas do however manage to make even Farage seem to have leade4rship ability!

A classic example of give a child the encouragement of an adult and they will take on the world.

Just the very sort of 'creep' who does UKIP so very much harm in the real world when noticed - another unprincipled, liar, cheat and freeloader like Mick McGough in the making.

Will no doubt manage to scrape together some qualification to make up for personality and like McGough end up as a gofer and bean counter of people of ability but little judgement.

There is no shortage of the moral free self serving illeducated and over qualified fools in our society - one sound reason for cutting spend on Universities to get them working not shelter them to provide an army of technocratic human waste.

If you thought I despised such people - be assured you are not wrong.

Sadly UKIP leadership and its parasites are destroying UKIP with just the sort of stupid and abusive behaviour, dishonesty and self serving ignorance we see from the likes of McGough, Heavers and their ilk.