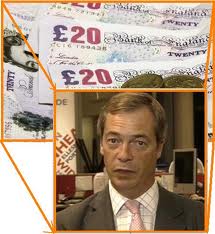 And all because UKIP thought they could ignore their own membership rules. And all because Nigel Farage's ego wouldn't allow him to admit that UKIP was in the wrong!

We will be publishing the full court judgement shortly.

A CLASH of personalities at a Teesside branch of a national political party has cost more than £16,000 in legal fees, its North-east organiser has claimed.

The UK Independence Party (UKIP) must carry the can after a row at its Stockton branch triggered a string of court appearances described by one judge as a “storm in a teacup”.

The “unfortunate and regrettable” falling out between Alan Hardy - the branch’s former press officer - and its then chairman Gordon Parkin sparked a legal marathon, London’s Appeal Court heard.

Mr Hardy, who joined UKIP in 2007, two years after he quit the British National Party, “did not get on” with Mr Parkin and, within months, resigned as press officer, telling Mr Parkin that he would not serve in any post on a branch which had him as chairman.

But Mr Hardy continued as a member of the branch and the atmosphere became so poisonous that a meeting in February 2009 had to be abandoned when the caretaker of the hall where it was held asked everyone to leave “on account of the noise from the raised voices”.

He was awarded £750 damages and UKIP was told to take him back as a member on payment of a £10 subscription.

Yesterday, Sir Mark Potter, sitting with Lord Justice Ward and Lord Justice Tomlinson, said Judge Fox had been right to rule that Mr Hardy’s membership of UKIP had never been lawfully terminated and to award him damages “in respect of the interference with his membership rights”.

The appeal judge said neither the Stockton branch, nor Mr Parkin personally, should have been joined as parties to the case, so Mr Hardy’s case against them failed. However the national party is now facing up to heavy legal costs after its appeal against Judge Fox’s decision was dismissed.

“Since all of this, the Stockton branch has been dissolved. Mr Hardy, like all the other members of that branch, are welcome to attend meetings in Middlesbrough and Hartlepool.”

Mr Parkin confirmed the whole process had been costly for the party.

At a preliminary hearing earlier this year, Lord Justice Ward described the dispute as “a storm in a teacup” after hearing Mr Hardy was by then back in the party.