House of Commons to debate British membership of the EU! 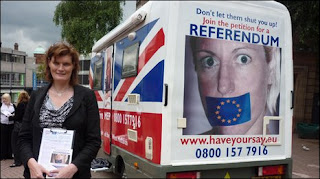 So Nikki's referendum petition has succeeded in getting a debate in the Commons! Fantastic news! And still the signatures keep rolling in!  Today, she also appeared on the BBC's Daily Politics to talk about her successful campaign.

So in just over two years Nikki Sinclaire has succeeded in doing something that Farage and his sycophants have failed to do in over a decade. Need we say more?

The historic House of Commons debate on if the UK should be allowed a referendum on whether to pull out of the European Union is set to take place next week on Thursday the 27th of October 2011 from mid-day onwards in the main chamber. This follows the presentation to Downing Street of a petition calling for a referendum.

If MPs vote in favour of a referendum, David Cameron will come under huge pressure to offer the British public a chance to say for once and for all if they want to withdraw from the EU.

The Commons Backbench Business Committee met this afternoon to set the date. Nikki Sinclaire MEP who instigated and then delivered, along with a broad cross-party delegation of MPs and MEPs, the petition of over 120,000 signatures to No 10 Downing Street said "This is a victory for democracy, and for the common man whose voice has been ignored for too long. It has been a long haul, but gathering these signatures has been a great experience, and my thanks go out to all those people who worked so tirelessly to make this happen".

The motion that has been submitted for debate is:

Nikki Sinclaire has vowed to keep the pressure on David Cameron and his government. "The signatures keep coming in" she said today, "and next Thursday we will be back at the door of 10 Downing Street with even more. The people are speaking out now, the government must listen."