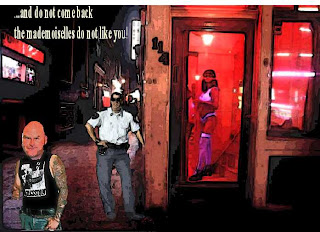 The odious Paul Nuttall and How Not to Do Politics

Is there anyone out there who still thinks that the odious Paul Nuttall would make a good future leader of UKIP? Then why not listen to his dire appearance on 'Any Questions'? Inept isn't the word to describe it!

The level of his debating skills is best illustrated by his describing Ed Miliband as looking weird and in need of a a lobotomy.  Dimbleby even had to remind the wannabe leader that he was a member of UKIP! It was all downhill from that point on. Click here to listen to the fool.

Much has been made of the fact that Lord Hesketh has abandoned the Tories for UKIP. Hardly news when you consider that he is just another failed Tory seeking a place on a sinking ship.

The NEC elections are approaching. The NEC is dominated by Farage's sycophants and is nothing more than a mouthpiece for Fuhrer Farage. Just ask Steve Allison. He actually thought that his opinions would count for something when first elected to that body. He is now sadder but much wiser! See: LINK

Here is Dr Edmond's analysis of the candidates.

Last year I published a marked card of NEC candidates. Many people last year told me they found it helpful to know where candidates loyalties lay.  By overwhelming popular request I repeat this for this years runners and riders.

both include one MEP , John Bufton and Trevor Colman as seconders. Trevor is now Independent UKIP and John is veering that way. I have worked with John and Trevor in the South West and I can vouch for their honesty, integrity and dedication to our cause. Both Mr Rowlands   and Mr Smith have real experience and are not reliant financially in any way on UKIP.

Then I would put those apparently untainted by Cabal and Young Independence (Farage youth) influence, no MEPs or party paid hacks amongst their proposers,

If you want an independent NEC representing and upholding UKIP's aims and ideals then I suggest you vote for the first two above. Unlike the Cabal they are definitely not in UKIP for personal gain and as such represent the true ethos and spirit of UKIP.

The remainder are tainted by a mixture of MEP  and party hack support and  youth lacking experience. An easy target for Farage dangled Brussels baubles and finance. Most are to a greater or lesser extent Farage sycophants with some indeed supported by Farage himself or his long time associates Nuttall and  Malcolm Wood.

I see D Denny, another long time Farage supporter, boasts of being involved in  altering the party constitution yet again! So if you  want less party democracy in UKIP and more rule from the top think carefully about how you vote.

Neil Hamilton has more political baggage than Jacob Marley's ghost but I can see one good reason for having him on board. He would be a credible alternative leader to Nigel Farage! I anticipate there will be increasing unhappiness in UKIP when Farage pushes on with his pan European party. There will be resulting leadership challenge. UKIP needs a complete clear out at the top and Mr Hamilton and his wife might just do that.

To read the original: LINK
Posted by Junius at 18:27