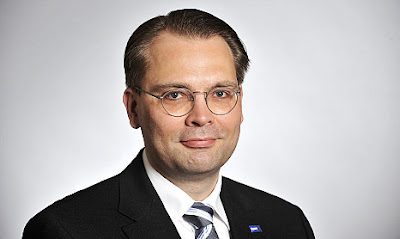 Interesting article taken from a blog devoted to exposing UKIP's fascist allies in the EFD. No wonder Nikki, Mike and Trevor walked from that sordid group! So why are the rest of UKIP's MEPs happy to sit with fascists?

You all might remember the quote "Whenever I hear the word culture, I reach for my gun." It's frequently misattributed to Hermann Goering, but it actually comes from a pro-nazi play called Schlageter. People usually quote this to point out the brutality and violence of the national socialist regime, well normal people do that. True Finn MP Jussi Niinistö whom I've blogged about before apparently uses the phrase completely without irony.

Jussi Niinistö, you can't see his hands but they're reaching for his gun

Helsingin Sanomat reported that in a parliamentary session this Tuesday, Jussi Niinistö said he is a strong proponent of expanded presidential powers, and that "whenever I hear the word parliamentarism, I reach for my gun". Let's just re-iterate that this quote is frequently raised as an example of the despicable brutality of the nazi regime, it's certainly not a phrase that is in common use in Finland and would probably be in itself enough to send you to prison in Germany. Needless to say, this caused quite a bit of a scene in the session, and probably will haunt mr Niinistö for months to come.

To read the original: LINK
Posted by Junius at 16:41