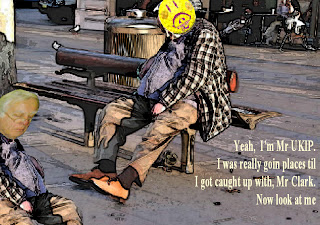 A damning indictment of probably UKIP's most incompetent MEP. Written by someone in the know!

I have personally known Derek since before the 2004 EU campaign and although this letter seems personal, I feel that his situation in the party needs addressing. You will all realise that Derek, like myself, is getting on in years and has limitations of what he can do and what is expected of him by the East Midland Members of the UKIP party. Everyone has heard stories of him falling asleep in the EU Parliament and at airports, this is not the publicity wanted by the party and is not encouragement for younger active members to stay in the party. After all these younger members are needed to move our party forward.

As a person Derek is a very nice gentleman but, unfortunately, it doesn’t take an Einstein to see that he is incapable of effectively carrying out his position in his current post as a UKIP MEP. I saw him on one of the days at the last EU campaign and although he was there in person, he did not play an active part with the team on the streets.

Over the last seven years this region has not moved forward, since the departure of Kilroy-Silk, which indicates that Derek’s ability has been a contributory factor in this.

I am outlining the following issues regarding Derek which I feel you should take on board.

1. His closure of regional office leaving the party without one, leaving only his personal office which is not very accessible to the public.

2. Derek dismissed two of his employees/activists on the grounds that there were not suitable for UKIP if this was the case, as Derek knew them before hand, why did he employ them.

3. Lib Dems keep churning out masses of leaflets across our council wards and we have to ask ourselves why we haven’t had any from Derek?

4. Why have we only stood at one County Show across the East Midland Region in the last year?

5. Why has Derek not done any regular surgeries with the public across our region?

6. There has been no extra effort into the effects that the EU and its regulations has had on our East Midland workers at power plants, new infrastructures or Bombardier, in Derby. Again you have to ask yourself why not? Although he attended the Bombardier Union Rally the people of Derby did not know who he was, even though he had been their MEP for seven years. Hid did not speak on the platform because he did not have the common sense to arrange it with the Union Leaders. He has never had any meetings with the Bombardier board of directors or CEO’s and he has never met the workers in situ.

7. Although he has attended some branch meetings, he has never taken on board the need to talk to the general public/voters in the UK and has just settled to preaching to the UKIP loyalists. The party need him to inspire and drive activists forward.

8. During the last seven years we have only had one copy of a regional newspaper as Derek has not supported publication of this.

9. Everyone knows the EU is slowly crumbling with the situation getting worse and that the majority of the public are, in principle, against the EU. Instead of our membership increasing during his seven years in office it has stagnated and been vastly reduced, since the days of Kilroy-Silk. We now have fewer activists on the ground as most of the members are, like Derek and I, too old to actively campaign for the party.

10. We have no ongoing East Midland campaign strategy to gain seats in Westminster and in this respect, Derek has failed UKIP and its members.

11. I strongly believe that because of Derek’s age, and without being ageist, he’ll be too old to carry out his post and duties as an MEP candidate. Our East Midland Members loaned funds for the campaign to get Kilroy-Silk and Derek elected. We need to ask ourselves where is the next £80,000.00 going to come from for the next election in order to campaign properly.

12. We are all fully aware of the part Derek played in the Leicester By Election/Mayoral Election and his subsequent apologies for not stopping the debacle that ensued. The position regarding this was as follows:- The mayoral candidate which he supported was not a UKIP member, not even a UKIP supporter and did not pass any UKIP assessments. She was enrolled as a candidate outside some school gates and had never been a political activist. During the campaign she did not release any photographs, information or any public statements about herself or her policies. She did not attend any hustings or reply to any newspapers, tv or radio stations. She did not give any information to her own campaign team which caused a local neutral newspaper to ridicule UKIP, stating not to vote for its paper Mayoral candidate. Our parachuted parliamentary candidate in Leicester was even a bigger joke. His anti Muslim rants actual made him very unpopular. Leicester is mostly a Muslim area and this situation made some of our activist very wary for their own safety. His rant on You Tube outside the local press office made it more bazaar. We have to ask why the NEC, EMCC Chairman and MEP condoned these ridiculous candidates over and above good local UKIP members/activists. This whole situation has damaged UKIP’s standing in Leicester.

13. Adrian Haynes, one of our general election candidates, was twice asked to stand down by Lord Pearson, even though he was actively campaigning and distributing leaflets for over a year in his constituency. On the first occasion he was asked and Adrian refused, and at this point in time Derek should have supported him and stood by him and requested that Lord Pearson should not ask again, but he let this happen.

14. East Midlands Area does not have a UKIP Exhibition stand or stall with the appropriate advertising regalia like others in the party.

15. Derek has never encouraged pro active UKIP ideas or campaigning in this region. He does not realise the importance of being pro active in the UK and his position is not just to sit on EU committees feeding his
own ego.

16. Derek has stated to the East Midlands County Committee that he had never been and was not under any type of investigation from the EU OLAF department, re any fraudulent misappropriation of his EU office running expenses. It has come to light from fellow MEP, Marta Andreason, that he has been wrongly spending his EU expenses and has been ordered to pay a large sum of monies back to the EU because of this. One leading tabloid newspaper has apparently got all of this information and has not yet made this public. We can only believe that this has not been done so because they are with holding this information, to make a press release nearer to the next EU elections to seriously damaged UKIP’s credibility. You can imagine what headline this would make. Derek will probably want to retain his position as an MEP as long as possible to repay these monies. His best action would be to stand down and take his vast EU Pension package, on top of his teachers and state pension he already receives.

17. Derek has been using a 20 year old photograph of himself and at almost 80, most of the members do not realise his actual age and most have probably never seen him in person.

In the light of all the information we know about Derek , we think now is the time for him to go, if we are to stand any chances in future elections and improve our standings in the East Midlands.

This letter has been sent to Nigel Farrage, all of our MEP’s and each East Midland Branch Chairmen for them to distribute a copy to their branch. Hopefully Nigel will persuade Derek to stand down and give UKIP half a chance in the East Midlands.

NAME REDACTED
Posted by Junius at 08:30

sorry Junius but though I know your absolute integrity as individuals I shall not re-post this letter nor would I have used it.

The letter, although as far as I know is 100% accurate without knowing the author I do not believe it is of much value.

This could have been written by someone with a personal ambition to get his snout in the trough!

Yes I know beyond all doubt that Derek Clark is dishonest, corrupt and a liar. I also KNOW that the circumstances of the OLAF enquiry are largely as represented but it demeans the contention to quote Marta Andreasen as the source.

Marta Andreasen can not be trusted on anything as she has a court proven record of dishonesty see:
http://martaandreasen.blogspot.com/p/andreasen-vs-eu-commission-judgement_24.html

Also do bear in mind that as an ex bean counter for the EU Commission Marta Andreasen passes herself off as The Chief Accountant for the EU Commission, which she was not and it was not until AFTER her wrongful dismissal case was lost and the Court found against her that she seemingly re-invented herself as some sort of whistle blower!

It was at that stage that Marta Andreasen started touting herself around British political parties to try to get back on the lucrative EU Gravy Train. Notably as a SPANISH citizen resident in Barcelona her credentials were unacceptable to any party of credibility or ethicality.

IF you want more information on the dishoneasty, corruption and self serving irresponsibility of Derek Clark do see:
http://derek-clark.blogspot.com/
where every word is attributable in context.

Yes indeed Derek Clark is unfit for office as a British MEP but then again he is sadly a UKIP MEP where few are fit for purpose and with no vision, no training, no strategy, no tactics, no organisational structure, no ethics and allied to the gutter extremisrts of the racist, xenophobic, anti Jewish, holocaust deniers, anti homosexual and pro EU membership colleagues some of whom support the beliefs of Anders Bereeivik of Norway!

The Pan EU Political EFD Group which Nogel Farage leads and UKIP is a member of renders EVERY UKIP MEP and their salaried staff and supporters unfit for purpose - yes that may well include YOU.

PS.
Sorry Junius but without a signature your letter is not valid.