In a previous post we mentioned how UKIP's leadership had brought in free membership in a desperate attempt to inflate membership figures. See: LINK

It is amusing to note that many branches were not even made aware of the free membership offer until it announced on UKIP’s website. Nor were they told that joining for free was not the same as paying to join the party. So much for forward planning and keeping your troops informed!

Upon joining you receive the following email:

From: UKIP
And why is UKIP’s free membership offer a scam?

1. You don’t have any voting rights. For instance, you won’t be allowed to vote in UKIP’s forthcoming NEC elections or future leadership elections.
2. You won’t be allowed access to UKIP’s members only forum.
3. You won’t be sent ‘hard copies’ of party literature or even your membership card.
According to UKIP’s website:
"Members signing up for free receive an e-membership card, advance personal notification of events in their area, regular email updates from the Party and free digital editions of Independence News and the Bulletin from Brussels."

So what happens if you don’t have ready access to a computer? The answer is tough luck!

We should point out that UKIP is in breach of its own constitution by denying new members the right to vote in internal elections:

4.9 Members shall receive a membership card and the Party's newsletter. They shall be entitled to vote in all relevant internal Party elections.

But when did ignoring the rules ever bother UKIP’s leadership?
Withholding this right from new members is discrimination. Would you really want to join a party that will treat you as a second class citizen, without membership rights or voting privileges?

But of course, those people who have joined UKIP under the free membership scheme are not really considered members of UKIP by the leadership.

This sordid little scheme is nothing more than a confidence trick to hoodwink UKIP's fee paying membership into thinking that the party now has over 17,000 members. It doesn't.

UKIP's own official membership numbers can no longer be trusted. The figures are based upon offering 'free memberships' over the Internet to artificially boost the numbers, deceiving the fee-paying UKIP membership into the false belief that the party is still growing.

Douglas Denny – UKIP NEC member, Himmler lookalike and serial idiot – let the cat out of the bag in a recent post on the ‘British Democracy Forum’. 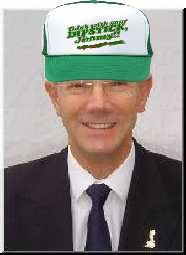 1. Originally Posted by douglas denny
As for people joining UKIP for the free and limited membership (they have zero voting rights which is the important thing in any political party), then they must want to assist UKIP in building up the membership figures
So there you have it. Denny admits that the scheme is designed to increase declining UKIP membership figures.

It is interesting to note that those who have joined under this scheme have noticed a considerable increase in email spam. We would hate to think that UKIP has sold their details to a third party marketing company!

Why not call Jonathan Arnott – Party General Secretary – and tell him what you think of UKIP’s latest scam?

And don’t be put off by his ‘frightened rabbit about to be run over by a car’ look. He always looks like that.

A call to ELCOM would also prove useful. Will they approve of a party that denies new members a say in how it is run?
Posted by Junius at 13:03

I joined UKIP for free and I got a vote in the Leadership Election.