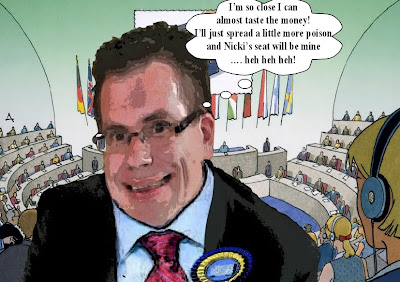 An e-mail has emerged suggesting that UKIP's Mark Croucher has been receiving information stolen from Nikki Sinclaire"s office in Birmingham. The e-mail, which contained dozens of highly sensitive and personal documents, relating to the MEP and members of her staff, was sent by John Ison, and was addressed to winballpizard@yahoo.co.uk. It seems that this e-mail address belongs to Mark Croucher.

An extract from the e-mail, verifying the addresses, briefly appeared on the British Democracy Forum. It caused a massive panic amongst the UKIP leadership, as they realised that one of their own was implicated in the theft, which we understand is already under investigation by the police. A UKIP MEP is also believed to be implicated. 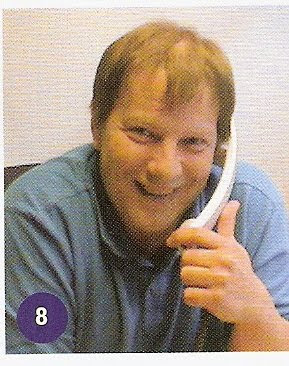 MEPs and party officials alike will be aghast to learn that such dirty tricks take place with the full knowledge of the upper echelons of the party hierarchy.

As one MEP told Junius "Mark Croucher won't be welcome in my office any more, I can tell you!"
Posted by Junius at 21:48

How brave of you Junius going to such lengths to get factual information for us all as to have a shower with him.

Be warned it was Nikki Sinclaire who has been covered widely in British and EU press pointing out MEPs spend £3M of tax payers money on Viagra & boob jobs!

Sinclaire seems to be doing more than the rest of the UKIP MEPs put together exposing The EU - now that she is liberated from The Pan EU Political EFD Group - she not only has her own 4000 & 6000 budget but the parliament and the British media seem prepared to take her seriously and respect her for disassociating herself from racism, anti Judaism and violent anti homosexuality that seems endemic in Farage's claque.

Have you seen the eMail that is widespread about Batten?

Same tactics as used by Mark Croucher and Annabelle Fuller aided by Douglas Denny on Farage's behalf when he first seized the leadership!

I hear nocturnal activities at the conference were somewhat curtailed when the flouncing ground to a halt confronted by heavyweight opposition!