Nigel says relax to his sycophants and oddballs. Ms Collins gets used to her new 'position' in UKIP. Squatting on the floor in front of Nigel must be hard on the knees. 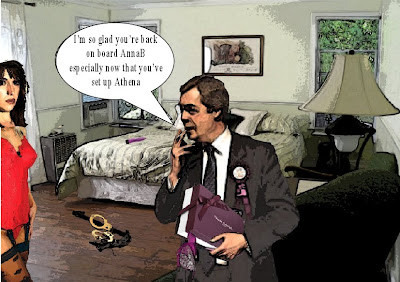 And what a shambles it was!

Christopher Monckton was clearly the biggest joker in the pack. He has been made policy director! A performing monkey would have been a better choice. His speech was enthusiastic but idiotic. No change there then!

Dartmouth is now UKIP’s spokesmen on AV. What a pity that his speech showed a clear lack of understanding of the subject in question. He should use Wiki for some basic information. He could then avoid making an ass of himself.

Farage was his usual arrogant self, surrounded by the usual assortment of sycophants and assorted odd balls. He was sporting a rather strange pair of yellow trousers which seemed to please Annabelle Fuller. Ms Fuller spent most of the conference flouncing around as if she owned the place. However, she managed to avoid Kirsten Farage who we were told was there to keep an eye on her errant husband. However, we did hear that Nigel and Annabelle managed to sneak off to 'discuss' Athena PR. 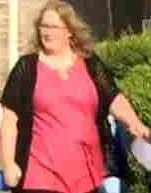 Mrs Farage fails to keep Nigel on a tight chain.

All most embarrassing. The whole conference lacked any professionalism and was largely ignored by the media. Only the BBC bothered to give the conference any sort of coverage and they concentrated on Farage’s ludicrous claim that UKIP is set to become the third biggest party in Britain. Indeed, many UKIPPERS at the conference seem to believe that UKIP is all set to form a government within 10 years! Now where have we heard that before? Remember 2004? We seem to recall certain senior UKIPPERS making the same idiotic claim after the Euros.

Jane Collins was wheeled out to the masses. Much was made of her ‘victory ‘. We would have thought that coming almost 12,000 votes behind the winning candidate was hardly a triumph!

It should not be forgotten that Ms Collins polled less votes than other UKIP candidates in previous By-elections.

And remember Hartlepool in 2004? Steve Allison came third with 3,193 votes (10.2%). In 2004, he was wheeled out to the same enthusiastic UKIPPER response as Ms Collins has just experienced in Scarborough. And what happened the following year? Allison’s vote fell to 2,682 votes (7%).

Nuff said. Another false dawn. And Steve Allison's absence was duly noted by one of our contacts and a source close to GLW. Has he already fallen from grace? Shouldn't he have been there for the whole conference? After all, he is Clark's favourite choice as the next lead MEP candidate in the East Midlands. Or does Nigel now favour someone else to succeed Dippy Clark?
Posted by Junius at 18:46

For information, Steve Allison chaired the afternoon session of the conference!

mea culpa - one of the Junius crew rang me and I had heard from ONE only of my contacts that Steve was not there - hence I did not publish it as fact since I TRY to have every story I publish verified by two or more people.

My feedback was from a number of UKIP supporters and a journalist who were there and I mentioned that one had said Steve Allison was not there - wwhether on one day or the other I did not take note waiting for substantiation.

My apologies as I mentioned it in passing to Junius and clearly realising that I try very hard to be 100% accurate they must have assumed that I had confirmed it.

The fault was mine - mea culp, grovel, grovel ;-) I should have been more specific.

I am grateful to Junius for confirming some of the details I was subsequently able to publish!