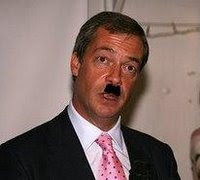 Readers will recall that Colin Denby was removed as a UKIP candidate after allegedly making racist comments. See: LINK

It has emerged that Nick Hogan – UKIP Chorley Branch Secretary – contacted Farage to report Mr Denby. Mr Denby was immediately deselected as a UKIP candidate and suspended as a party member. So once again normal disciplinary procedures are thrown out of the window because Fuhrer Farage has spoken!

This is the man who happily sits with fascists, racists and homophobes in the EFD! And this is the man who refuses to act when one of his MEPs refers to a black man as a baboon! We suggest that any future dictionary reference to 'hypocrisy' should include ‘see Nigel Farage’ as part of the definition.

Mr Hogan, you claim to be outraged that someone is prepared to make racist remarks in a pub. And yet that ‘outrage’ is strangely lacking when it comes to Godfrey Bloom's rascism - Farage’s drinking partner, fellow MEP and flatmate. We wonder why? Worried about upsetting the Fuhrer and thus wrecking any prospects of a future career in UKIP? See: LINK

A Chorley pensioner who has stood down from the May local elections after being accused of using racist language has denied the allegations. Colin Denby had been put forward as a UKIP candidate for the Labour held Chorley North East seat when voters go to the polls on May 5.

However, within hours of his name appearing on the nomination papers, the veteran soldier had quit the party over a row about racist language. It is believed he was suspended after an argument broke out at the Parker’s Arms, in Park Road, between the author and UKIP Chorley branch secretary Nick Hogan.

Mr Hogan, a former pub landlord, said he had been shocked by the language that the 72-year-old had used in a public place and he immediately contacted leader of the party, Nigel Farage to report him.

He said: “Colin Denby has been de-selected as a UKIP candidate for the local elections.

“The language he used is not representative of the values of the party - we are a libertarian and non-racist organisation and will not tolerate the use of racist language.”

It is alleged that Mr Denby, who stood in the General Election in Rochdale, had used the word ‘Paki’ in a heated debate with Mr Hogan and fellow party candidate Tommy Shorrock about EDL demonstrations.

But Mr Denby, who has written a novel based on his experiences with NATO intelligence circles in the early 1960s, denied the allegations.

He said: “I am a man of integrity and certainly not a racist. I believe Mr Hogan and I are incompatible and that is why I have withdrawn from the election.”

To see the original: link
Posted by Junius at 22:23