Surely it cannot be true? As if UKIP's BNP, NF, and EDL, and Oirish Republican connections were not bad enough, according to this report Godfrey Bloom has revived the British Movement. Is Bloom the new Colin Jordan? 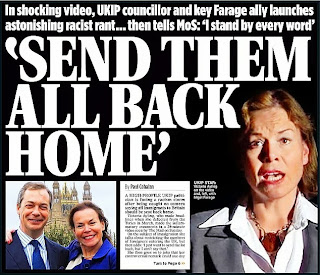 As we know, all political careers end in failure, and Victoria Ayling's ended yesterday.

Exposed by her own mother as a former member of the National Front, it has emerged that she is also under police investigation over an alleged 'hate crime' against her ex-husband. She doesn't seem to get on very well with her family, does she?

The best bit is the way that Nigel Farage was so quick to stand by her last week after the release of the infamous 'Send them all back' video that set the scene for yesterday's bombshell. Didn't see that one coming, did you Nigel? Do you remember what you told the BBC last week, Nigel?

"Nigel Farage says he and the party stand by her. Mr Farage told BBC News that he could ‘see no reason’ to take action against Ms Ayling and he accepted her explanation."

Do you still stand by her, Nigel?
Posted by Junius at 08:58 No comments: 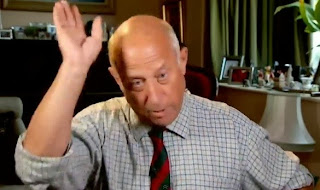 This week in the European Parliament, at a press conference hosted by Marine Le Pen, a journalist enquired as to the possibility of Godfrey Bloom joing Le Pen's far-right grouping after the 2014 euro elections.

Frank Obermeyer of the Austrian Freedom Party responded with some interesting statements.

So there we have it.

Bloom's reported resignation from Ukip did not happen.

Bloom's reported resignation from the EFD group in the European Parliament did not happen.

As of today, Decemer 13th, Bloom is still listed as a Ukip MEP sitting in the EFD group, as is confirmed here.

It was Le Pen's confirmation of Bloom's leading role in the extreme right EAF that caused much embarrassment to the party. Now Obermeyer has confirmed that the link is still there.

We predict that Bloom will stand for Ukip in 2014, and that after the elections Farage will take the party into a far right group. His only problem is how to present himself in the British press as being senior to Le Pen.
Posted by Junius at 09:29 No comments: 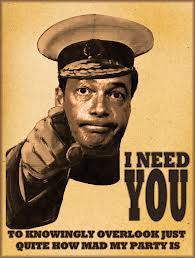 The case of Alexander Blackman has become a cause célébre. We learn tonight that Farage is planning to jump on the bandwagon now that others have identified the issue for him.

We wonder who will write the press statement for him. Farage's 'voice' will not be interested, as Blackman is in stir, and can't be shagged. Towler is isolated. And Kelly will not be well disposed towards Blackman given that the Royal Marines shot quite a few of his Republican chums back in the old days. Perhaps the Winball Pizard can knock something up - we understand he may be back on the scene shortly.

Expect something like "I, me, myself, was the only person, me, I, myself, who  has consistently said that Blackfellow or whatever his name is should be given a medal. Me, I, myself."

> Has Steve Crowther Been Covering Up For A Paedophile In The UKIP Ranks? 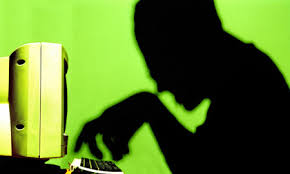 So here it is. We have been picking up whispers about a paedophile scandal in the South West for some time now. David Gale's 'open letter to Nigel Farage' has finally brought matters into the open. The name of the individual referred to is known to us, as it is to Derbyshire CID. 'Grooming' is a criminal offence. So is complicity.

"One of the starkest examples of this lack of governance has been the tolerance of the party’s continued association with a convicted paedophile who, whilst no longer being a member, has continued to attend party functions and provide strategic UKIP documentation from his personal website. Party members with children, who have been asked for lifts to UKIP events by the paedophile, have been left unaware of the background of an individual who is on the sex offenders register for life. When warned about this individual, Chairman Steve Crowther has quite extraordinarily contrived means to remove the reporting individuals from the party. Through its lack of risk mitigating processes and actions, the party has knowingly exposed its members to undue risk.

My own efforts to raise the alarm have been ignored by the leadership, it being left to me to contact branches to alert them to the potential risks to members and to have photographs of the paedophile campaigning for UKIP removed from branch websites. More recently, I have gathered evidence that I understand has previously been in Steve Crowther’s possession that demonstrates the paedophile grooming a vulnerable young UKIP member on Twitter, in violation of his probationary licence, yet Crowther has encouraged the individual to maintain his party activism. If this is UKIP’s response, how many more paedophiles remain within the membership?"

David Gale is Chief Executive of Kids For Cash UK, an organisation that campaigns to expose paedophiles. Well done, David.
Posted by Junius at 09:44 No comments:

> Nigel Farage and the Age of the Political Idiot 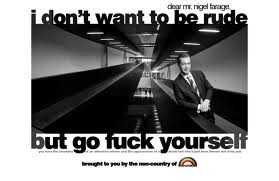 Call them Europe’s Angry White Men: a cast of populist politicians propelled onstage by the Continent’s economic catastrophe. Sometimes jingoistic, usually furious, almost always unfit for office, these would-be demagogues are both symptoms of the crisis and megaphones for its social distress. But where Italians swoon over a paunchy comedian, Beppe Grillo, and Greece has been terrorized by the neo-Nazi Golden Dawn party, the British have recently taken a shine to a pinstriped former investment banker. As if to confirm the suspicion that this is some giant act of national self-parody, his name is Nigel.

Nigel Farage is head of the U.K. Independence Party, and over the past couple of months he has become possibly the most talked-about politician in Britain. That’s partly because he is one of the few British politicians capable of provoking an opinion. Almost everything about Farage and his followers is faintly cartoonish. Their core demands are simple: Britain should swagger out of the European Union and slam its door to immigrants. Where other parties’ symbols are inoffensively universal—here a red rose, there an oak tree—UKIP goes for gaudy purple and yellow and a big, bold pound sign...

Chain-smoking and beer-swilling, Farage, 49, poses as that most British version of masculinity, a bloke: the sort who says what he thinks, thinks what he says, and doesn’t give two hoots for niceties. On the floor of the European Parliament in Brussels earlier this year, Farage addressed the EU president, Herman Van Rompuy: “You have the charisma of a damp rag and the appearance of a low-grade bank clerk. … You come from Belgium, which of course is pretty much a non-country.” It was classic Nigel: reprehensible yet funny, and expertly channeling the id of Middle England.

There is about Farage the strong whiff of actor’s greasepaint. He’s a man of the people who went to a public (in U.S. terms, private) school, Dulwich College, before working in the City. He’s a Euro-skeptic who sits in the European Parliament. And were his apparently populist policies ever to be subjected to serious scrutiny, they might not be so popular among his largely blue-collar voters. It’s the rich and big business that would do best out of UKIP’s proposals for a low flat tax and the breakup of the public health system.

http://www.businessweek.com/articles/2013-07-03/britains-nigel-farage-and-the-age-of-the-political-idiot
Posted by Junius at 09:00 No comments:

> The Internal War Claims Another Victim - & The Lead Actors Show Themselves.


We have discussed the press office led internal war here before. Things are hotting up, we see. Two very significant developments are reported in the press today.

Firstly, the sacking of Mad Monckton, who, if you believe him (and few outside UKIP do), is the only 'non-voting' member of the House of Lords in history, from his role as leader of UKIP Scotland.

On Farage sacking him, Monckton said: "I'm not happy he didn't telephone me before he sacked me. I thought Nigel would have had the common sense to ring me." This will come as no surprise to those who know Farage. A total coward, he has never had the guts, or at least the decency, to look a man in the eyes when he stabs him in the back. You supported him, Monckton, so now its your turn to smell it.

With the support of Murdoch, Sykes, and the Barclay brothers, Farage no longer needs the largesse that may have 'flowed' UKIP's way through Monckton's connections. We have reported on this recently, and we suspect that this story is warming up. Farage is wise to distance himself from this - but it may be too late for at least two other UKIP MEPs, one of whom is seen as a possible challeger, and who he will have no hesitation in throwing to the media wolves anyway. 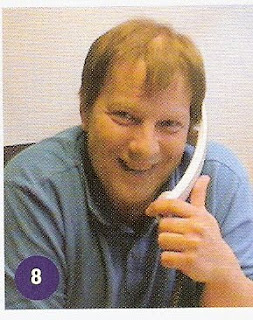 There are rumours that the Winball Pizard - aka Mark Croucher - may also be lined up for a return to the press office. Nothing would surprise us in Farageworld. 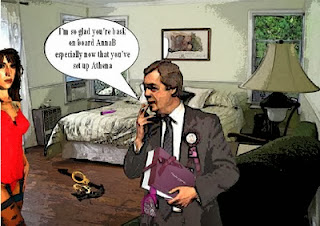 But back to the peerage thing. Farage has recently 'come out' with an admission that he thinks he deserves a peerage. This is, of course, not news to those who are close to him. Nor is it a secret that Fuller wants to be the next Mrs Farage. Goodness knows there has been the odd (very odd) scandal in this department! Might we see some interesting changes in the Fuhrer's domestic arrangements soon?﻿