UKIP: Derek Clark found guilty by OLAF of misusing his allowances. Farage lied to members to cover it up 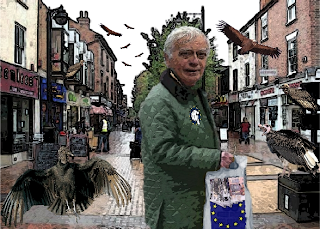 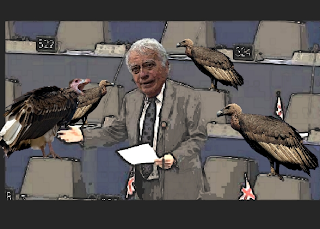 And so now it's official! Clark has been found guilty of misusing his EU allowances. So once again Junius and GLW have been vindicated! In 2008, we first published an article giving details of the OLAF investigation in 2008. LINK. Here's what we said:

We even published the OLAF case numbers:

In 2009, the story was published in the Derbyshire Times. LINK. Clark claimed:

"I know nothing about the details of this. I've not been told by OLAF."

Another lie! As we pointed out at the time:

It is interesting to note that Clark has said that “I know nothing about the details”. Has Clark forgotten that OLAF officers are obliged to tell him what he is being investigated for? So after 18 months Clark knows nothing? Or is Clark lying yet again?

"after 18 months of investigations, Mr Clark had yet to be questioned, and knew nothing about the allegations made against him".

"If there was something to find it would have been found."

We continued to give updates - as did GLW - on this story: LINK

In 2011, we informed our readers that Clark had been ordered to pay back a substantial amount of money. LINK

Clark again claimed that we were lying. He also continued to lie to members of his own regional committee. Farage once again backed his lies. Again, we were branded liars and troublemakers by Farage and Clark.

And now the facts are out for all to see! So can we expect an apology from all those who vilified GLW and this blog? We very much doubt that they will have the humility or integrity to do so!

It's time for both of them to resign. Or is it now official leadership policy to lie to members - including senior officials - when asked questions about party corruption and fraud?

And please note that Farage now admits that he may have also been under investigation by OLAF. See article below. He had always previously denied this to members. Another lie! And this is the man who wants to run the country. We wouldn't trust this liar to run a bath for Ms Swann!

Here is the Guardian article in full:

Two senior Ukip MEPs have repaid more than £37,000 they say they were asked to divert by a senior adviser to the party
Rajeev Syal and Daniel Foggo 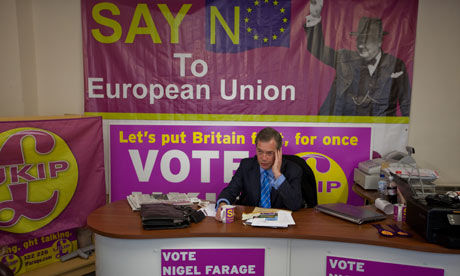 Ukip leader Nigel Farage has admitted that he also might have been investigated for diverting EU money, but says he has done nothing wrong. Photograph: Sean Smith for the Guardian

MEPs from the United Kingdom Independence party, whose organisation has railed against the European Union's "gravy train", have been found to have misused taxpayer-funded allowances following a crackdown by Europe's anti-fraud watchdog.

Two of the party's senior members have repaid more than £37,000 meant for office staff after diverting it to party workers based in the UK. One MEP told the Guardian that he was asked to divert the funds by a senior adviser to the party.

The findings follow an inquiry by Olaf, the EU's investigative unit, and will raise further questions about the way that Ukip has sought to profit from the European parliament's generous expenses and staffing regime. The party argues the EU is a waste of money and calls for Britain's withdrawal.

It comes days after a YouGov poll gave the party a major boost, showing Ukip in third place behind Labour and the Conservatives on 9%, with the Liberal Democrats at 8%.

Documents released by Olaf show that Derek Clark, Ukip's MEP for the East Midlands, had successfully applied for money from the EU to pay for two assistants in 2004 and 2005.

But instead of working for Clark, the inquiry found they worked almost exclusively for Ukip from Britain.

One of those paid by Clark was Niall Warry, Ukip's former office manager in its Birmingham headquarters, who received around £10,000 for six months' work.

He told the Guardian that the decision was approved by senior people within the party. "Ukip MEPs, sanctioned by the top of the party, have been paying for salaried party officials with public money. I knew I was being paid by Clark, but I was not aware then that it was against the rules," said Warry, who has since left the party.

Clark said he began paying political workers with EU money only after being asked to do so by an adviser to the party, whom he refused to name. He has repaid around £31,800.

"We were using legitimate ways to use this money to try and alert people on the problems of the EU.

We believed that we were doing it for Britain," he said. "It was an honest mistake."

Olaf's inquiry concluded that there was a breach of rules. "The discussed payments could be considered illegal indirect party funding," it said.

Graham Booth, the late Ukip MEP for south west England, was asked to pay back £5,555 after Olaf found he had also diverted money to fund a party official. It is understood that Booth, who died in December, paid the money back in full.

Another Ukip MEP, Mike Nattrass, was subject to an Olaf inquiry but was not forced to pay money back.

Other Ukip sources have claimed there was a "systematic" attempt to pay party officials using EU money.

In 2009, a former Ukip MEP was jailed for diverting £39,000 meant for a member of staff into a bank account he secretly controlled. Tom Wise, who represented East of England, spent some of the money on fine wine and a car.

Nigel Farage, Ukip's leader, admitted he also might have been investigated by Olaf for diverting money from the EU to political campaigns, but said he had done nothing wrong. He insisted there was not a systematic attempt to defraud the EU by his party.

"There is a hell of a difference between that and seeking personal gain from public money. In the case of poor old Derek Clark it has cost him out of his own pocket," he said.

How typical of Farage to seek to defend Clark by claiming that his colleague was not out for personal gain.  Nigel, it doesn't matter how much you try to spin it! Fraud is fraud! And YOU repeatedly lied to members in order to cover up this fraud!