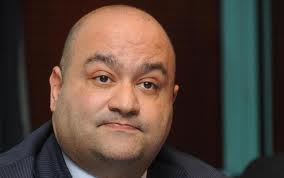 Lega Nord treasurer Francesco Belsito is believed to have passed electoral expense reimbursements to the family of Umberto Bossi, the party's leader. According to the authorities in Milan, Naples and Reggio Calabria, the 4 sons of the party leader Umberto Bossi and those of Rosi Mauro, Bossi's personal assistant, were given the money to pay for hotels, meals and travels. Belsito is currently being investigated for fraud and illegally funding the party:

Also under investigation are a number of employment contracts, with OLAF apparently having been brought into the equation.

Bossi himself has a previous conviction for fraud, as well as receiving a one year sentence for incitement to racial violence in 1998. He also sat as an MEP as a member of UKIP"s Independence & Democracy Group in the 2004-2009 European Parliament.

Racial violence and fraud - that seems to be the order of the day in Farage's EFD group. But the biggest fraud of all is that perpetrated on UKIP's member and supporters who believe that the MEPs are actually doing something to help get the UK out of the EU. Whilst Clark gets his knuckles rapped for - errrr - fraud, Bloom urinates in hotel lobbies and employs his family whilst pompously denying that he - errrr - employs his family, and Batten gives speeches to people convicted of - errrr - fraud, UKIP members and supporters just keep on handing the cash over.

http://www.agi.it/english-version/italy/elenco-notizie/201204031012-pol-ren1017-lega_nord_treasurer_belsito_under_investigation
Posted by Junius at 14:52

it may interest you to know hat although this issue which so closely involves UKIP seems not to have been published in Britain in the dead tree press.

The subject has however featured on the FRONT PAGE of The Buenos Aires Herald for two consecutive days.

There is also a rumour in the EU, which is hard to confirm due to the religious bank holiday, that Bossi has resigned - I stress I can NOT confirm this rumour though I have heard it from two seperate sources!

IF this is the case it is possible the vile Lega Nord extremists will leave The EFD Group which Nigel Farage has strenuously made efforts to prevent as with his failure to take ANY action relative to the support for Anders Breivik!

IF The EFD Group collapses I gather Nigel Farage will personally lose control of a great deal of money and privilege such as the 4,000 now 400 Budget and the appointment of staff and international travel!

It is believed that it is only in Nigel Farage's interest that UKIP is associated with the extremists in The EFD Group!

Strange that the British MSM have so little interest in MEP corruption and the odious antics of The EFD Group and UKIP - They have not even reported the many 10s of £1,000s Derek Clark was ordered to repay of the money he had fraudulently obtained as proven by OLAF - Nor the guilty verdict of OLAF against Graham Booth nor the failure to absolve Mike Natrass beyond the wooly insufficient evidence style verdict.