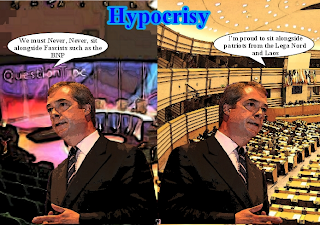 
Police in Piacenza have arrested 37 year-old Lega Nord member Davide Allegri for corruption and bribery. Former Civil Protection and Environment provincial councillor from Cortemaggiore, Allegri had also been the Urban Planning councillor of the municipality of Cortemaggiore. He had left both offices after being notified that he was under criminal investigation. Police found that while in office, Allegri would slow down procedures for permitting the construction of solar plants, inducing applicant companies to used an engineer of his choice, who would then repay Allegri for the favour.

Lega Nord hold the co-presidency of Nigel Farage's EFD group in the European Parliament.
Posted by Junius at 08:57