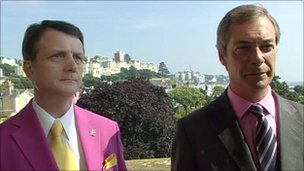 Gerard Batten and Nigel Farage: Two disgusting hypocrites who have done rather well since joining the EU Gravy Train. Batten claims to hate Nigel for his hypocrisy but is he any different?

A number of folk have commented on the fact that an article linking Gerard Batten to the convicted fraudster and right-wing extremist Gregory Lauder-Frost has been removed from this blog. We can explain....

Batten is subject to certain legal proceedings, with decision expected any day now. It is rumoured that he has had an injunction put in place to prevent discussion about the case in the British press. As such Google appears to have intervened and removed the post from British viewers. The article remains in place for people accessing this blog from outside the UK.

This is ironic, as Batten is a defender of Julian Assange, the Wikileaks founder who is facing extradition to the USA. Apparently transparency and public access to information are things to be defended - unless that information concerns Batten!

If details of the allegations against him were to appear on Wikileaks, would Batten be so happy to defend Assange?

We are happy to report that the CPS has rejected several complaints made by Batten against Greg Lance-Watkins. These complaints were originally made to the police in a desperate attempt to silence GLW and his blog. Yet another example of Batten's disgusting hypocrisy. And since was telling the truth a crime, Mr Batten? And why have you never contacted GLW to complain about ANY of his posts if they are untrue?
Posted by Junius at 09:56

I gather there was an injunction of some sort placed upon the information IN The Court relative to the allegations of racism etc. made against Gerard Batten - which clearly no one who was not actually in the Court would have known about.

The Court itself willingly provided certain details when phoned by members of the public which can be shown.

With regard to information published by Junius and myself regarding Gerard Batten's behaviour firstly there was no reason to believe that any kind of injunction was being used to suppress the facts as shown by the fact that the industrial/employment tribunals when John Whittacker was found guilty and also when the verdict of guilty handed down against UKIP, Nigel Farage and Godfrey Bloom took place - no such suppression of the truth was imposed.

Similarly when Lisa Duffy lied to the Court for UKIP as when Paul Nuttall lied on Anthony Butcher's UKIP controlled blog and also when he was officially censured by The Data Protection Commissioner.

There were also no restrictions on reporting when UKIP effectively lost their case against me when Mark Croucher acted against me when in UKIP employ supported by Paul Nuttall and Clive Page in Court who all three held positions working for UKIP leadership.

You will also note that although The Court issued an order for payment in my favour neither UKIP nor Mark Croucher had the integrity to honour the Courts and owe me a considerable sum of money morally running to over £12,500 which they have to date defaulted on.

With regard to whether the complaint that led to the strange removal of the facts from Junius was made by Gerard Batten or Gregory Lauder-Frost or someone acting on their behalf seems immaterial as clearly both parties have endeavoured to suppress the truth about them and reasonable comment in the past and have a track record of what many consider to be extremism and I believe can easily be seen as incitement to racial hatred be that based on ethnicity or superstition.

Fortunately it will be noted that neither Junius nor I were aware of any suppression of the truth to protect Gerard Batten and neither of us acted willfully against a Court diktat as neither of us reported on the supposedly confidential facts put forward in the Court but merely reported the facts in the public domain.

Interestingly you will note that if you read Junius' blog elsewhere in The EU it is clearly visible uncensored!

Obviously had Gerard Batten had any complaint legitimate or perceived he has had every opportunity to make contact with me for either a right of reply on my blog or if he could show that one word of what I published was false he could reasonably have asked for it to be corrected.

It does rather look as if Gerard Batten or his associates are seemingly trumping up issues in a desperate attempt to suppress the truth and maliciously and vindictively suppress reasonable reportage of their odious activity.

Police State that we seem increasingly to be governed by presumably it is still acceptable under free speech to tell the truth and to state and discuss opinions!

Gerard Batten has loudly proclaimed his support for the right of free speech of Julian Assange of Wikileaks - just as associates of his have been willing to give support to Anders Brevik and apart from mere words' of no consequence or value no one in UKIP leadership took action against those supporting Anders Brevik - a sad reflection UKIP, Gerard Batten and their racist, anti homosexual, Holocaust denying, anti Jewish associates.

Many will remember the vile tract published by Anthony Bennett of UKIP whilst working for Jeffrey Titford (leader of UKIP), the vile attack on Muslims of the award winning Zionist Malcolm Pearson (leader of UKIP), The exploitation and people trafficking of Poles by Roger Knapman & family (leader of UKIP) and of course the odious tract put in the public domain by Gerard Batten regarding his antipathy to Islam believed to be influenced by his personal superstitions and maybe also the fact that his Filipino wife is most probably a Catholic - it will be known by the informed that there is great animus between the Catholics and The Muslims in the Philippines!

Presumably the verdict of the Court on Gerard Batten's alleged racism etc. will be made known shortly, just as were the details that the case was taking place which were readily available direct from the Court by phone!

If Gerard Batten actually believes in what many see as his extremist behaviour and associates and his apparently overt willingness to seemingly spread racial hatred based upon his choice of superstitions and beliefs one wonders why he wishes to suppress the discussion of his views!

To avoid ANY misunderstandings - I was not only unaware but clearly there was no reason to be aware that Gerard Batten had or had sought any type of suppression order to suppress reporting of the facts.

Further please note I did NOT report any comments or facts that I had any reason to believe were not in the public domain.

It is also my opinion that this entire issue is a trumpped up and thus dishonest situation as Gerard Batten took absolutely no steps to contact me or to contact Junius through me to seek correction or inform us he had some sort of suppression order to prevent reporting of the facts.

May I remind readers that Gerard Batten is a public servant and it would seem he is acting in abuse of his position in seemingly inciting racial hatred based u8pon his chosen superstitions.

The day that it is unlawfull to discuss the actual behaviour of public servants will be a sad day for these United Kingdoms and to note YET AGAIN UKIP seeking to suppress the truth and act against freedom of speech upholding EU diktats and Political Correctness is possibly the ultimate hypocracy.

With regard to the idiotic comments of UKIP supporters repeatedly claiming that I am mad and that no one reads Junius' or my blog and that the facts we present are untrue - how come they spend so much time reading our blogs and attacking us?

The number of readers is to me utterly irrelevant, on my blogs - I post them as an archive record of facts and my opinions on those facts.

It is the caliber of the readers which is of consequence!

Indeed! Batten has NEVER attempted to complain to the Junius Team - thru this blog - about ANY of our posts concerning him. However, we can well understand Batten's desire to hide the truth about himself and his disgusting associates!