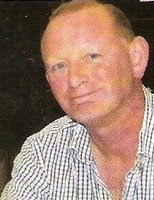 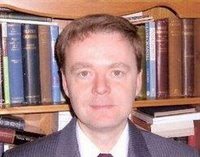 John West (Pictured on the left) has been the subject of a Farage instigated dirty tricks campaign that stretches back to late 2007 when George Curtis sent him a threatening letter after Mr West organised a UKIP conference on immigration. In this letter he was warned not to hold future conferences or face the consequences.
In the Spring he was again the subject of dirty tricks when Jeffrey Titford misused the Party Database to send out an email attacking both Mr West and Christopher Hudson for holding a UKIP conference on Law and Order. Despite complaints to the NEC about Mr Titford’s abuse of UKIP’s database nothing was done.
Mr West later reported Jeffrey Titford to the police after he became aware of ‘alleged financial irregularities’ involving Mr Titford’s office. I understand that he did this after UKIP’s leadership refused to look into the matter. In retaliation for making this complaint Mr West’s MEP interview was posted on You Tube by a mysterious Moroccan taxi driver. Coincidently Annabelle Fuller - a UKIP Press Officer and very close friend of Nigel Farage- was in Morocco at the time of the posting.
After this incident Ms Fuller was forced to resign. Bizarrely Farage blames Mr West for her demise and is determined to see him thrown out of UKIP.
Last year Mr West was also denied the right to take his seat on the NEC. He then attempted to seek re-election to the NEC at the end of 2008.
Farage made it clear that he would not allow Mr West to stand. In order to stop him David Challice - UKIP’s Administration Manager- was told to tell Mr West that he had missed the deadline for nominations.
Challice, in a bumbling attempt to support this lie, sent Mr West a copy of the envelope in which his papers had supposedly been sent. The postmark was cited as proof that he had missed the deadline.
Mr Challice is clearly not the brightest of individuals and apparently hoped that Mr West would not notice that the envelope was in a different hand. To make matters worse the envelope had been posted in Liverpool!
Presumably Mr West had travelled all the way to Paul Nuttall’s house in order to post the letter. Clearly Mr West has money to burn!
As you can imagine UKIP’s bumbling attempt to hoodwink Mr West failed.
Here is Mr West’s letter to David Challice. It has been lifted from Greg Lance-Watkins blog: http://caterpillarsandbutterflies.blogspot.com/2009_01_01_archive.html
Subject: NEC nominations FAO David Challice
Date: Thu, 15 Jan 2009 13:23:48
Dear Mr Challice,
In your letter dated 17th December you provided ‘evidence’ in the form of a photocopied envelope to substantiate your allegation that I had missed the closing date for NEC nominations. You stated that my nomination papers were in this envelope. You also said the envelope was still sealed. The Post Office has now confirmed to me that the envelope in question was posted in Liverpool on 12/12/8. Are you suggesting that I travelled all the way to Liverpool to post a letter? My nomination papers were in fact posted in Wickham Market on the morning of the 10th December. It was sent first class and was recorded. I have a receipt to prove this. Would you care to explain how my nomination papers ended up in an envelope posted at the other end of the country?
In your telephone conversation you claimed that the Post Office may have done this but failed to provide an explanation as to why they would wish to do so. You then claimed that my nomination papers had got lost in the post. In the space of a few minutes you had apparently forgotten that in your original letter to me you had confirmed receipt of them! When I asked you to check all the envelopes for a Suffolk postmark you stated that they had just been destroyed. You then became quite agitated and shouted that the question of the envelope was ‘irrelevant’ as Paul Nuttall had ‘banned’ me from standing as an NEC candidate. You then slammed down the phone.
If I have been banned, as you claim, why was it felt necessary to put my papers in someone else’s envelope and produce this as evidence to explain why I could not stand for the NEC?
Do you not understand why I feel so aggrieved, especially after the way I was treated over the video?
Why does the party attack its own members in this way? Why can't we be treated honestly?
Yours sincerely,
John West
End of letter.
Mr Challice is clearly a fool and a liar. Besides being a Farage sycophant he is clearly prepared to fabricate evidence in order to deny a member the right to stand for office.
Of course, Mr Challice is not new to this game. He colluded with Peter Reeve to deny Robin Page the chance to stand in the Euro elections. He has also refused to recognise Allison West’s democratic election as a branch chairman in Suffolk. Her only crime was being critical of Farage and his clique.
Unfortunately Mr Challice is too stupid to realise that he is being used by Farage and will be dumped by him when he has served his purpose. Indeed, he is set to lose his job when the Newton Abbot office is closed.
Mr Challice, if you had any brains you would be dangerous.
Posted by Junius at 18:00

What is David Chalice, what is his background? Racist as you say, but what about his commitment to comming out of Europe?