UKIP: Annabelle Fuller in a pickle! 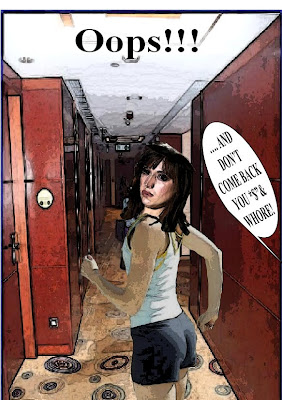 To be quite frank, very few people believed Annabelle Fuller, when in September 2008 she claimed to have been the victim of malicious telephone calls late at night from UKIP members. This, she claimed, was her reason for resigning from her job with UKIP.

She failed, of course, to mention that she was sacked for releasing a video of an interview with a potential candidate on the internet.

To be quite frank once more, very few people believed Annabelle Fuller when she concocted a strange story about her laptop being stolen by a Morroccan taxi driver, who then posted the video in question on the internet.

Despite bowing to pressure and sacking Fuller, Farage then quietly put her back on the payroll, knowing that no MEP or NEC member would have the guts to stand up to him. She remains on his parliamentary payroll to this day.

Now it appears that Ms. Fuller may be in a pickle. Today, a certain tabloid will be making a decision, based on legal advice, about the possible publication of a story. Once again, Farage's appalling judgement, based on his own desires and interests, looks set to drag the UKIP name through the mud.
Posted by Junius at 09:42

I think you will find the red tops and tabloids are more interested in Andrew Bridgen the Tory MP who was exonourated by the Police seemingly false allegations of groping some bimbet from The westminster Bubble (isn't that why a certain 'class' of girl WORKS the bubble?).

Annabelle Fuller has a track record of lies and self serving dishonesty - many will remember when she was fired from UKIP and working under Farage - based on her corruption, dishonesty and utter incompetence.

There is no doubt Annabelle Fuller is a foul mouthed liar without ethics, integrity or morality.

Some may even remeber the pack of lies she promoted to raise her personal profile even conning Nigel Farage into telling lies to The Media - who were well aware her stories were fantasy but as they were salacious published them anyway.

I doubt the tabloids will publish much on Fuller when the Andrew Bridgen story is still bubbling under.

Even young Guy Basnett at The Sun has no doubt had his fill of her by now.

She did right royally set him up and waste a lot of the paper's money he had spent based on her alluring 'lies' as I recall.

Regards,
Greg_L-W.
PS - IF you wish to clarify any of these FACTS check my blog at:
http://UKIP-vs-EUkip.blogspot.com
or phone me for more FACTS.