Gary Cartwright on 'Working with UKIP'


I've often been asked how I came to work in Brussels.

In a nutshell, I joined UKIP in around 2001 and found myself, having been co-opted onto the London Regional Committee, working with mayoral candidate Frank Maloney. Immediately after that campaign I took myself off to Minsk where I worked with elements of the democratic opposition that have now been absorbed into the Belorussian Popular Front. Its an interesting life...

On my return from Minsk I found a letter on my doormat from Nigel Farage inviting me to come out to Brussels. Thats how it happened. I had studied European Governance and Democratic Theory at Uni, so I suppose I was considered to be as well qualified as anybody in UKIP.

Sadly I fell out with Farage, as so many do, and I have been airbrushed out of UKIP history, and painted as some sort of a right-wing extremist. Anybody associated with me, it is hinted, is also an extremist, something that I find extremely offensive.


﻿﻿﻿So lets put the record straight, shall we?

This is from the first issue of Bulletin From Brussels, which I edited for, I seem to recall, 4 issues. It was a bit of fun, and I was quite pleased with it at the time It was a publication of UKIP's Independence & Democracy Group in the European Parliament.

Whilst I remain on good terms with most of the fine folk in these pictures, I wonder what would happen to them if they were photographed with me now?


﻿﻿
Although the front page of the Bulletin always featured Nigel Farage, understandable given that he was head of the UKIP delegation in the EP, it was Roger Knapman, then party leader, with whom I always had the most pleasure working.


I have always credited Roger with UKIP's landmark election results in 2004. Without his political acumen, contacts, and steady hand (albeit with a little help from Kilroy and Dick Morris!) I think UKIP would have struggled to hold the 3 seats gained in 1999. 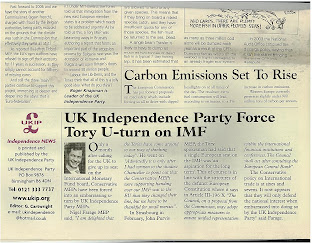 But is was not just in Brussels that we produced such literature. I was also tasked by Farage with editing a one-off 'Independence News', similar to something that had been produced previously. This, however, was officially a UKIP publication. If anybody associated with me is an extremist, then this cutting must surely beg some answers!


Of course, Nigel Farage is no more an extremist than I am, despite what some might say about him. It was always easy to write copy for him as he always had a clear idea of what he wanted to say, and generally trusted his staff to deliver.

And so there you have it. Since leaving the Independence & Democracy Group I have worked with Independent MEPs in 2 parliaments, and to this day I am happy to work with, in an official capacity, 2 UKIP MEPs.

I also had a brief spell working as a journalist, during which period I presented a report on extremism in the EU to the Simon Weisenthal Centre. Life is never dull in the world of politics!
To read the original: LINK
Posted by Junius at 10:13