UKIP extremism exposed by the media

And so at last the media spotlight is turning on UKIP extremism! It is gratifying to know that UKIP's clear links to far-right groups is finally being exposed by the British newspapers. For far too long Farage's UKIP has enjoyed an easy ride when it comes to this issue. There is more to come! 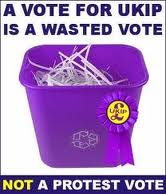 Nigel Farage, the leader of Ukip, is facing new accusations of homophobia in his party over its links with anti-gay, far-right European politicians and claims that he has backed a populist Polish priest who describes homosexual men as "sodomites".

Farage – whose party has shot up to 14% in an Opinium/Observer opinion poll today – vowed last week to exploit Conservative divisions over gay marriage, while insisting that his party "respects the rights of gay people to have civil partnerships". Its poll surge is a serious worry for Conservatives ahead of the 2014 European elections, from which Farage believes his party can emerge with the highest share of the vote of any UK party. Ukip's support is now almost half that of the Tories, who stand on 29%, 10 points behind Labour on 39%. The Liberal Democrats are on 8%.

While Farage is keen to portray Ukip as tolerant of gay people at home, investigations by the Observer show that it is in alliance in the European parliament with parties containing politicians who have expressed open hostility to homosexuals. Farage himself has been linked to a campaign in Poland supportive of hardline Catholic media outlets that are strongly critical of homosexuality.

In September, Polish free press campaigners produced a statement that they said was from Farage in support of Father Tadeusz Rydzyk, a Polish priest and founder of Radio Maryja and its associated outlets, whose stations stand accused of pumping out strongly antisemitic and homophobic material. Last year Rydzyk greeted the arrival of the first gay Polish MP with the words, "the sodomites are coming; it is a really grave matter". The statement reported as having been from Farage expressed the Ukip leader's "wholehearted support" and "encouragement" for the priest's media outlets, which it said were involved in "a battle to preserve freedom and democracy in Poland".

Last night a Ukip spokesman said that, although it accepted the statement had been circulated, Farage had not "written or signed" it and was unaware that it ever existed. Ukip, which has 11 of the UK's 73 MEPs, is the largest member of a group in the European parliament called Europe of Freedom and Democracy, which includes four members of the far-right, anti-gay United Poland party and nine members of the Northern League, the rightwing Italian party.

United Poland MEPs have strongly backed Radio Maryja. They left the European Conservatives and Reformists group – in which Tory MEPs sit – in protest at the Tories' gay equality agenda in 2011. A United Poland spokesman was reported as having said: "There is no place for homosexuals in our party."

The Northern League also has members with strong homophobic views. League MP Massimo Polledri recently declared that "homosexuals have to go to the psychologist to feel better", adding that having a gay son "would be like my daughter telling me she wanted to be a nun or to marry a Moroccan". The League was one of three parties which last month blocked a bill in the Italian parliament that would have made incitement to hatred of homosexuals an offence.

Rafal Pankowski, author of The Populist Radical Right in Poland and a social science professor at Collegium Civitas in Warsaw, said: "Radio Maryja is very strongly homophobic. It has frequently called homosexuality 'a disease' and 'a major threat to western civilisation'. United Poland MEPs have strongly supported this message. They are a radical right splinter group that competes for the significant homophobic audience of Radio Maryja."

The independent gay MEP Nikki Sinclaire, who was expelled from Ukip for refusing to sit with Northern League colleagues in the European parliament, told the Observer that Ukip was still "without a doubt homophobic".

Earlier this year senior Ukip MEP Roger Helmer equated marriage between two gay men with incest. He said: "If two men have a right to marry, how can we deny the same right to two siblings Are we to authorise incest?"

The party's candidate in the recent byelection in Croydon North, Winston McKenzie, said, days after Rotherham council removed children from Ukip-supporting foster parents, that it would not be "healthy" for children to be adopted by gay couples.

A spokesman for Ukip in Brussels said the party had no link with Radio Maryja, although it had supported the cause of press freedom in Poland. The spokesman said that the fact that Ukip had teamed up with other parties in the European parliament did not mean that it any way agreed with any of those parties' policies: "It is a marriage of convenience, so we get speaking time in the parliament. There is no necessity for commonality of policy."