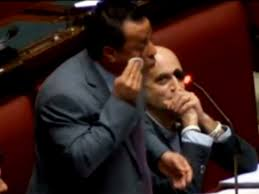 UKIP's partners in the EFD political group in the European Parliament, Lega Nord, are known for their extremism, and for the racially motivated violence of their members.

Now the media are reporting on one of their MPs in Italy, Gianluca Buonanno, 'blacking up' for a racist rant. This comes after a number insults aimed at Italy's only black minister, Cecile Kyengea, a lady of Congolese extraction.

Mario Borgezhio MEP has convictions for attacking a child, and for setting fire to the meagre possessions of a homeless immigrant. Another Lega Nord MEP, Salvini, has called for racial segregation on public transport.

Now all this might seem cowardly - attacking women, children, and the homeless. But let us remember - we are talking about Italians here, people who are not renowned for their heroism.

This is the type of scum that Nigel Farage depends on to keep his political group together. Remember, Lega Nord hold the co-Presidency of the EFD group.

This is what our forebears fought - and won - a war against in the middle of the last century. Nice people you suck up to, Farage!
Posted by Junius at 08:41