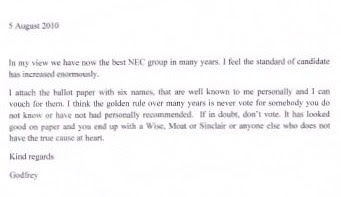 Here is the text of the letter mailed out to UKIPPERS by Godfrey Bloom's office. You will note the poor grammar and spelling mistakes. Only the most stupid of UKIPPERS would even try to defend Bloom's attempt to influence the outcome of the election. Copies of the letter were mailed with Bloom's regional newsletter and a marked copy of the ballot paper.

Spelling and grammar as the original:

In my view we have now the best NEC group in many years. I feel the standard of candidate has increased enormously.

I attach the ballet paper with six names, that are well known to me personally and I can vouch for them. I think the golden rule over many years is never vote for somebody you do not know or have not had personally recommended. If in doubt, don’t vote. It has looked good on paper and you end up with a Wise, Moat or Sinclair or anyone else who does not have the true cause at heart.

Bloom is in clear breach of NEC election rules.

He has sent out an unsolicited mailshot using the party database to promote favoured candidates.

He has used UKIP/MEP funds to do so.

He has defamed Nikki Sinclaire and the other NEC candidates by comparing them to two convicted and jailed fraudsters.

And who is he trying to kid with all that rubbish about having 'the true cause at heart'? Bloom should be the last one to criticise any fellow UKIPPER or patriot. Bloom had brought the Euro-sceptic movement into disrepute time and time again with his drunken outbursts, visits to brothels, lying about not employing relatives, applauding a terrorist bombing, his sexism, etc, etc, etc. For more on this disgusting little man see: LINK

There have been calls for Bloom to face a disciplinary committee for attempting to rig the election. Don't forget that Farage put Bloom up to it! 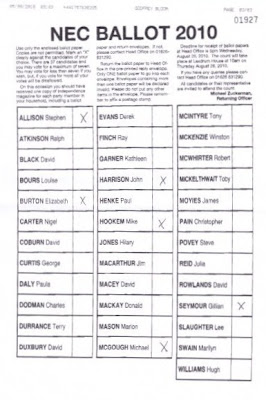 I can speak from personal experience that considering a recommendation from a friend or collegue whom you perhaps admire and respect, is not necessarily the right approach for considering as to whom is a suitable candidate for any position.

Research the candidate carefully, and do not be gullable and naive presuming 'everyone else knows better than you.

This is not necessarily so.

I once was asked my opinion on a candidate and I gave a rather biassed and unfair assessment of the candidate. The immediate response of the appointee was to totally discount the candidate soley on my words.

I expected the appointee to just consider my words in the context of all the other information that he had obtained about the candidate.

Later, I realised my opinion was totally unfair, unwarrented and prejudiced.

I was deeply ashamed of myself.

I had deprived a perfectly competent, suitable candidate for serious consideration for a serious position whereby she could have greatly contributed and caused positive changes.

My ill-thought out words and consideration of the consequences of them and how they would be received cost this candidiate the chance of an influencial position.

Yes, the appointee had a responsiblity too, but this incident taught me to think very carefully before giving my opinion on anything.

The trouble with words is that you can't take them back.

We all have prejudices of one sort or another, and even if we like and respect our colleagues we should always weigh their opinions carefully and not presume that they are correct and undbiased.

Hearsay is generally not enough for recuitment. It's what's on paper that counts.

It's all in the detail.

The reality is that what truly counts is a candidate's proven track record, and this is recorded and detailed in the application form.

It is this intricate detail of relevent experience that can be checked and tested that Personnel considers in order to achieve a short list.

In short, if your application form shows you are imcompetent for the job, you are not invited for interview.

The job of Personnel is to check either before or after appointment that the candidate has the experience and qualifications he/she claims in the application form.

This is done through a reference from a previous employer.

However, this reference itself is not necessarily taken as gospel, as sometimes the reference can be glowing because the employer wants to get rid of an employee, or as a 'deal' between the ex employer and ex employee for any number of reasons unbeknown to the new employer.

Personality clashes are not uncommon too, and it is not unusual for an employer to slag off a competent employee only because of personality differences.

The golden rule for candidates is to never slag off a previous employer.

Indeed, even if your last employer was a complete b*d it is wise not to state this and to mention instead at least one admirable quality you admire in your last boss.

For instance, you might not like Nigel Farage but at least you can say he is eloquent, and you can waffle on about how important it is to be a clear communicator, and how Nigel demonstrates this, blah, blah, blah,

The fact that you do not like what Nigel is communicating should be stated ableit diplomaticaly and with care.

A little humility can go a long way in helping you achieve a position you want.

Who you know can of course be instrumental in some people getting jobs, but it does not necessarily mean that the employer has appointed the best candidiate.

I once saw a person appointed to a high powered position within a large company largely based on recommendation.

Employers can be a bit lazy sometimes and rather than go through all the application forms they just appoint on recommendation.

This decison can lead to problems later, especially when they find that the collegue/good friend who recommended the person that they appointed 'set them up' and the candidate proves useless!

Life is a game. Know your enemies!

So Mr Bloom is recommending people who he sees fit to sit on the NEC!

If he is anything like the people online who recommend me things, I would suggest think again.

Last year, loads of people were
recommending on the Argus website that 'rock garden lights' were a 'must have'.

'My garden would be brilliantly transformed at night to look like a mediterranean lit garden of magical wonderment.'

Two of the lights didn't work and the light produced by the other 4 were pretty useless.

I ended up putting one of the rock lights so near a thriving purple plant that was fit and well that it eventually wilted and died.

Thanks for your comments.