Nigel Farage continues to make a fool of himself 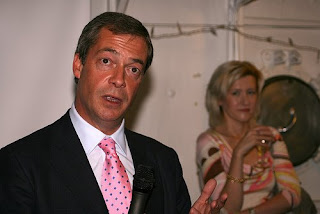 Nigel’s performance on The Politics Show clearly shows what a liability this man has become. He came across as childish and totally out of his depth. For instance, he seems completely oblivious to the fact that indulging in stupid stunts makes the Party look foolish. I can assure him that dressing up as a chicken or trying to persuade people to sing The Marseillaise in the EU parliament building is not going to win us any votes!

Here is the link to the video: http://uk.youtube.com/watch?v=RzQ1Xz23DYM
He then insults the intelligence of even the most politically naïve voter by claiming that he has no money. It’s a shame that Nigel failed to mention to the reporter that he earns over £100,000 a year. Indeed, he clears over £1000 in expenses in an average week.
Britain is now in full-blown recession, businesses are closing, unemployment is rising and many are living on less than £15,000 a year. And yet this fool of a man complains about his £100,000 salary!
Shots of various UKIP MEPs and officials boozing in a pub are also hardly the sort of image I would personally use or authorise to promote UKIP. Another shot of Farage littering the street with his discarded cigarette is also hardly going to endear him to the average voter or indeed the average UKIP member.
Here are some of the comments made by UKIP members on UKIP’s ind-uk@yahoogroups.com:
[ind-uk] An unfortunate episode‏
ind-uk@yahoogroups.com on behalf of tony stone
Sent: 25 January 2009 20:33:49
To: ind-uk@yahoogroups.com
Cc: David Samuel Camps (ukipse2@keme.co.uk)
Do others share my reserves over the UKIP feature in today's Politics Show? The BBC's trivialisation and clown of a journalist was bad enough but I don't think Nigel did us or himself any favours with his performance. What on earth is a British political party leader doing encouraging people to be singing The Marseillaise - whether in opposition to Ode to Joy or not is utterly irrelevant?
And do we really need to be seen siding with the 'smoke-in-public-and-be-damned' lobby? Finally, I think Nigel could have found a better response to the charge that he is effectively in financial clover over there than the assertion that he was better off before he went to Brussels. Us 'insiders' know and understand what he means, but I don't think that was the response our detractors will be quick to forget. I see the whole thing as a typical BBC stitch-up but I am surprised and disappointed that Nigel appears to have played into their hands.
I do hope it's just me
Re: [ind-uk] An unfortunate episode‏
From: ind-uk@yahoogroups.com on behalf of MartinHarvey
Sent: 25 January 2009 21:32:01
To: ind-uk@yahoogroups.com
Cc: ukipse2@keme.co.uk
I have just turned off the BBC video of this and do agree with Tony Stone. Nigel was at ease and communicated well with the interviewer, but could have adopted a much more favourable attitude. My main criticism is that we are at our most vulnerable time in our history, both financially and politically, that we must be serious and well prepared in all campaigning opportunities. I wonder what UKIP's plan was in this opportunity ?
best regards Martin Harvey.
P.S. I am very pleased that we are still \posting here, as the new official UKIP blogsite is way off maturity.
Re: [ind-uk] An unfortunate episode‏
From: ind-uk@yahoogroups.com
Sent: 26 January 2009 10:11:44
To: ind-uk@yahoogroups.com
----- have to agree, very disappointing. Sonya
End of quotes. Please also see Greg Lance-Watkins’s comments on Farage’s inept performance: http://www.caterpillarsandbutterflies.blogspot.com/
Posted by Junius at 22:28