UKIP: Nigel Farage & Lord Pearson: Not the best of friends 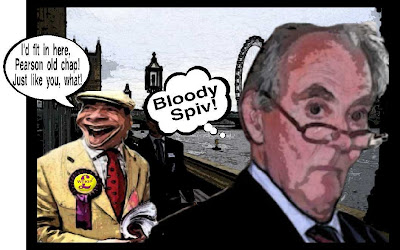 Lord Pearson recently made a quick trip to Strasbourg to discuss the Nikki Sinclaire situation. He also wanted to find out more about the EFD and what exactly 'his’ MEPs were doing in UKIP’s name.

He came away from the meeting a sadder but wiser man. He had expected to see the MEPs working together for the greater good. Instead, he found division, anger and dissatisfaction.

Batten and Farage were at each other’s throats. Batten wants UKIP to be more than just a pressure group. Farage, on the other hand, wants a deal with Cameron.

Farage also hates Nikki Sinclaire with a passion. He even threatened to resign if she was allowed to stay in UKIP. Sadly, this offer has not been taken up.

Pearson stuck to his guns and said that if Farage continued to insist on her expulsion UKIP could look for another leader.

Farage had to back down. He knew that Stuart Wheeler would not give him any money if Pearson went. Farage is not stupid. He needs Wheeler to finance his bid to get into Westminster.

But Farage has not forgotten this knock to his ego. He has been made to look a fool in front of his fellow MEPs. That is something he can’t tolerate.

He was already nursing a grudge against Pearson after being forced to stand down as leader. See: LINK

But now things are much worse. To say that Pearson and Farage’s relationship is strained would be an understatement.

Both dislike the other and both would certainly not weep if the other was not around anymore. They are now UKIP's answer to Blair and Brown. So can we now expect a Mark Croucher video stressing just how much they like one another? The theme to Love Story could play in the background while they exchange kind words and discuss unity.

It should an interesting few months for the pair of them!
Posted by Junius at 14:14