UKIP: Carry on Fooling the Public 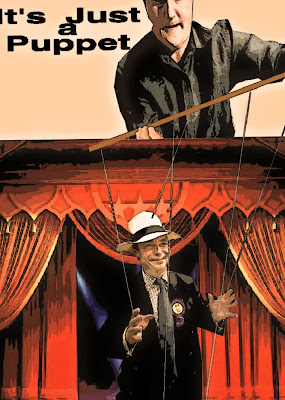 The launch of UKIP's manifesto in a tiny Westminster restaurant was a rather lack lustre affair.

Pearson was out of his depth, Bannerman looked bored and the odious Paul Nuttall looked confused.

However, it was amusing to see Pearson and Farage desperately trying to defend UKIP’s economic policies.

UKIP wants to cut taxes AND yet at the same time increase spending on defence, pensions, border police and prisons. So where will the money come from to finance this massive increase in public spending? It can’t all be financed by Britain's current contribution to the EU!

UKIP would also slash 30-40% of all government budgets.

This would result in at least 1.5 million people being made unemployed.

And what is UKIP’s answer to this? You tell us. There is no mention in the manifesto of how exactly Pearson and Farage would deal with such a massive increase in unemployment.

But why are we even bothering to analyse UKIP's joke manifesto? Pearson and Farage are not really serious about achieving power.
UKIP is now just another Tory pressure group.

The journalists who bothered to attend the launch were also unimpressed by UKIP's spin!

Ukip's slogan should be 'Carry On Campaigning'

Ukip's Nigel Farage had promised the party would run "the edgiest campaign in British political history". So edgy he'd even shed his blazer? Only time would show. Arriving at today's manifesto launch, held in the tiny back room of a Westminster restaurant, one had to wonder if Nigel had overplayed his hand.

"He might have done," muttered Ukip's press chief, Gawain Towler. But party workers were giggling admiringly at the official campaign T-shirts.

"I love it when you talk straight to me," ran the insanely risqué slogan of one, while the other bore the legend: "Withdrawal! Before it's too late". Ah, an ejaculation joke. Will this do much to dispel your image as 19th-hole bores?

"Actually," reflected Gawain, "with this lot I don't think of the golf club so much."

The rotary club, then?

It turned out the event was held in the restaurant because it was in the same building as the BBC and Sky's Westminster studios. Ukip was realistic, admitted Gawain. "We can probably make them come three floors downstairs." Alas, a phonecall requesting directions revealed the journey wasn't quite so simple for all concerned. "The party chairman is so much part of political life that he doesn't know where this building is …"

Easily the most brilliant joke in the manifesto is reference to what "a Ukip government" would do. But the document also makes much of "the LibLabCon" – rather recalling those people who honk about ZaNuLiarBore in the mistaken belief that they're being arch – and still refers to Britain in the third person feminine. "She has lost control of her borders." Matron! Ukip also wishes to reinstate "the banking corset". If its campaign struggles in its second act, perhaps they could rush out T-shirts reading: "My other top is a banking corset".

Kicking off the launch proper, the deputy-leader, David Campbell-Bannerman, promised policies "from animal welfare to pubs" – truly, the full gamut of thinking from Y to Z. There will be no cuts with Ukip, who promise to spend an eye-watering 40% more on defence. Prisons are another of their big ideas, as in more people were going to be put in them, which meant more would have to be built, thus creating lots of jobs. The logic was faultless if you didn't think about it.

And so to the leadership. When Farage announced he would be devoting his energies to standing against the speaker, John Bercow, in Buckingham, the party's top job was taken over by former Tory peer Lord Pearson of Rannoch, the sort of patrician dullard you pray not to be seated next to at dinner. He has quite the way with metaphors. Brussels was "a corrupt octopus", and pretty soon "we won't just have its tentacles round us, we'll be in its bowel".

By some presentational cock-up, it fell to his lordship to explain Ukip's eccentric policy of backing Eurosceptic MPs from other parties in some constituencies, often whilst still fielding candidates themselves.

"We're going to actively campaign for Eurosceptics," he declared, before explaining that they were fielding a candidate in Stroud, but that the chap was using his election address to tell people to vote for the Tory candidate. But if not, to vote for him.

"We're going to have billboards saying "Ukip says vote for … whoever it is," rambled Pearson. "Our candidates – where we have them – say: 'If you possibly can, you vote for mostly the Conservative candidate … or if not hold your nose and by all means vote for me …"

"None of these people have actually asked for our help," he explained, unwittingly invoking the old "with friends like these" cliche. Before long, it was on to Ukip's proposed ban of the burqa and niqab in public "and some private" buildings. How were they going to enforce that?

Well you have. It's in your manifesto. "Have we?" his lordship wondered of his more junior colleagues. Doubtless he'll get round to reading the 15-page document in good time.

Tag-teaming Pearson was the more seasoned media hand Nigel Farage, who has an enduring line in misplaced confidence. "I don't want to be rude about the other parties – that's not my style," he smiled knowingly, in the manner of a man who fondly imagines he has a style other than "affable berk".

Still, he was Churchillian in comparison to some of the other candidates to whom we were introduced. There was Barking hopeful and boxing promoter Frank Maloney, confirming Ukip's commitment to bringing the finest minds to bear on British politics, and a Serbian woman standing in North Kensington (so soon after Ukip's immigration lecture, one didn't like to bring up the ironies). And finally, "our surprise candidate". "Move over Sam Cam, move over Sarah – standing in Kensington is Caroline, Lady Pearson of Rannoch!"

An edgy finale indeed. England expects to see her ladyship in one of the ejaculate T-shirts at her earliest convenience.

And this is what The Times had to say:

Don’t vote for us,’ says UKIP at Alice in Wonderland campaign launch

The UK Independence Party made an unusual appeal yesterday to some of its supporters: “Don’t vote for us”.

There was a slightly Alice in Wonderland feel to the Eurosceptic party’s campaign launch as it entertains hopes of capturing its first Westminster seat.

Lord Pearson of Rannoch, the party leader, began the day by urging some of his own candidates to tell their supporters to vote for someone else.

He wants them to follow the example of Steve Parker, who is standing for UKIP in Stroud, and has produced a leaflet in which he declares: “I ask you to vote for David Drew [the Labour candidate] if possible. He is a committed Eurosceptic, who will continue to fight for our freedom in Parliament and I don’t want to stop him getting there.”

Lord Pearson told The Times: “I hope I will be able to persuade a few of other candidates to do the same. Some of our men are putting the bayonets in the wrong enemy.” UKIP has said that it will not stand against eight candidates, mostly Conservatives, who are in favour of leaving the EU and yesterday he went one step further, urging voters in some constituencies where UKIP is standing to back someone else.

He added: “I don’t think this has ever been done before.” He was speaking as the party launched its first full manifesto, which — as well as withdrawal from the EU — includes pledges to freeze immigration and ban the burka. The confusion continued as Lord Pearson denied that the ban would apply to private buildings before being gently corrected by his policy chief.

In Buckingham, the party’s best hope of a seat, the contest is just as baffling. With the main parties standing aside, Nigel Farage, UKIP’s former leader, is challenging the Speaker, John Bercow. While Mr Bercow is the firm favourite, Ladbrokes is offering 10/3 on Mr Farage.

“We see him as our only hope against John Bercow,” said Sue Moore, a 50-year-old IT sales manager. “It’s expenses; Bercow’s not a good ambassador for Buckingham. He flipped houses.” Ms Moore, who has previously voted Labour, says that only one thing might make her waver in her support for Mr Farage: “I’m very pro-Europe.”

Mr Farage hopes to exploit such oddities. “There’s a lot of confusion about the election here,” he said. “I’m in this campaign to say to people, ‘You can send an earthquake through British politics by toppling the man who is the symbol of the last Parliament’.”

Burning desire for change was not, however, the dominant emotion on the pleasant streets of Buckingham yesterday. Billy Treadwell, the manager of the George Inn in Winslow, said that he would probably vote for Mr Farage “if I’m not too busy”. Other voters scuttled away as UKIP leaflets were proffered.

“Under no circumstances will I vote for him,” said Joy Bungard, a retired civil servant. “John Bercow’s been an absolutely brilliant MP.”

Yet Mr Farage insists he is “in with a chance” of overturning an 18,000 majority, and his name recognition seems to be high, as he makes steady progress on his pledge to visit every pub in the constituency.

At Rosie’s Bar, Bob Cross, the owner, thinks that Mr Farage is talking sense, but is still undecided. His summary, at last, is simple: “In the end, I’ll probably vote for whoever will help me the most.”

To see the original: LINK
Posted by Junius at 22:46