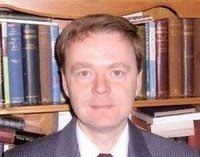 About a year ago John West's UKIP media test interview was posted on YouTube with the derogatory title "How not to do Politics". No one ever owned up to putting this supposedly confidential interview on a public web site for all to see. Ms Fuller had a copy of the interview on her laptop which she claims was left in the back of a taxi and returned to her anonymously a few days later. A trip to Morocco also figured in this tale somewhere. I was on the NEC when the matter came up and the then chairman John Whittaker closed down any possibly further investigation saying "I am not inclined to take the matter further"
Today I read in my Daily Telegraph, top of page 2, the banner headline "BNP to siphon off EU expenses". The initial paragraph states "The BNP intend to funnel tens of thousands of taxpayers money to its chosen causes to drum up support in the run-up to the general election." Reading on one finds this statement is more than a little misleading. It seems that the two BNP MEPs have agreed to give 10% of their annual £80000 pa salary plus their unused accommodation and travel allowances to a "community chest" to support "worthwhile local projects" like St George's Day celebrations.
This is brilliant as next year's St George's day is very likely to fall in the middle of the UK General Election campaign. Even better, the EU will try to block Griffin and Brons from using their allowances in this way! Its against the rules says the EU. This is a godsend to the BNP. Corrupt MPs obey rules to feather their nest, OK. BNP MEPs breaking the rules to promote local projects, not OK. Put it alongside the unelected Glennys Kinnock and the EU establishment discriminating against BNP democratically elected MEPs and the BNP will emerge as persecuted by the EU and will therefore garner much of the anti-EU vote and what is left of the MP expenses protest vote in the 2010 General Election.
In any free society Griffin and Brons can spend their salary how they like. Some MEPs choose to spend it in the bars, restaurants, gay bars and bordellos of Brussels and Strasbourg! When I stood as a UKIP MEP candidate I stated at all the hustings that I would give all my EU salary to UKIP, something which did not endear me to the UKIP party apparatchiks. I put this on my election website: www.ericedmond.com where it still is and can be checked by anyone interested. At one husting I remember describing EU money as 'dirty money' that I personally would not touch. I am sure these sentiments played a big part in my expulsion from the UKIP NEC and my deselection from my democratically elected position on the South West MEP candidate list!
If Farage's UKIP have any real intent to get us out of the EU then they better start fighting the battle on the right ground, the UK, this many sceptred isle, and not waste their time in Brussels and Strasbourg.
If UKIP don't the BNP will clearly move into the UK vacuum left by UKIP's obsession with EU money and its pointless, powerless talking shop, the EU assembly.
End of article.
To see the original: LINK
UKIP MEPs are far too greedy to EVEN think about donating part of their salary to good causes in this country.
Farage and his sycophants are now part of the EU establishment. Their sole aim is to stay on the EU Gravy Train and enlarge their bank balances at the expense of the British taxpayer. End of story!
Posted by Junius at 22:04