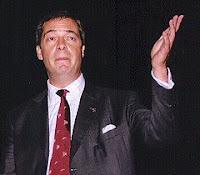 There has been a lot of speculation about the racists and homophobes that Farage has formed a pact with in the European Parliament. I can now reveal that the Brussels press pack are closing in on the one that everybody has missed so far.
The delightfully named Morten Messerschmidt is one of two Danish MEPs to be joining Farage's group.
In 2002, Messerschmidt received a jail sentence for incitement to racial hatred. But it gets worse - much worse.
In 2007, Messerschmidt was forced to resign from the Danish government after he was seen "Heiling Hitler" and singing Nazi marching songs in a bar in Copenhagen. He has subsequently denied some of the allegations, although at the time he confessed, and did the decent thing by standing down.
Now he is back, as an MEP, and will be sitting alongside Farage and his 12 disciples.
This is an absolute betrayal of UKIP, its members, and our country. With UKIP sitting alongside such people - (even Nick Griffin was not handed a prison sentence for his racist conviction) - surely it is no longer respectable to be a UKIP member.
So desperate was Farage to be president of an EP group, to further his own career, that he did this to UKIP.
Please click on the link below for more information on Morton Messerschmidt:
http://translate.google.co.uk/translate?hl=en&sl=da&u=http://da.wikipedia.org/wiki/Morten_Messerschmidt&ei=YrtNSoyqCdHb-QaclPWQBA&sa=X&oi=translate&resnum=1&ct=result&prev=/search?q%3Dmorten%2Bmesserschmidt%26hl%3Den%26sa%3DG
Posted by Junius at 19:01