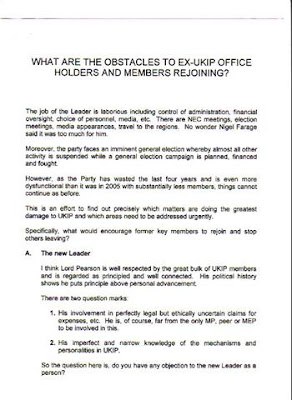 These VERY interesting documents recently dropped on our desk.

UKIP is now in a state of Civil War. A growing number of members are becoming increasingly angry with the the current state of the Party. The Nikkigate affair was the final straw.

Even former Farage sycophants are now starting to question the wisdom of allowing Farage's stranglehold on the Party to continue unchecked.

These documents are the result.

They were sent to ex-UKIPPERS. The documents call for all ex-UKIPPERS to rejoin the Party.

They then go on to present a damning indictment of the failure of UKIP under Farage and his sycophants.
It is clear that UKIP can only move forward if Farage and his sycophants are removed. They are the problem. They are certainly not part of the solution.
Unless Farage, Bannerman, the odious Nuttall, Denny, Gill, Zuckerman, Duffy, Bloom, Nattrass, Andreasen, Arnott, Oxley, Towler, Ransome, Clark, Smith, Rowe, Croucher and the rest of this rotton bunch are removed NONE of the proposed reforms will succeed. They are all tainted by corruption and will fight tooth and nail to stop Pearson reforming UKIP.
Don't forget that members of UKIP's press office even leaked stories about Pearson to the press in an effort to damage him after Farage was forced to stand down as leader following 'advice' by Wheeler!

Lord Pearson delegated contact with senior former members of UKIP with the intention of holding small lunch parties at the House of Lord. He has encountered resistance! That is no surprise. Whilst he sorts out this problem a small group is proposing to attack the situation from the flank.

Attached is a template which we hope you will wish to use and return your views to us. We will then present a consolidated concensus to Lord P. (with dissenting views if necessary) so he begins to get a fully rounded picture of the party and hopefully its way forward. No names of respondents will, at this stage, be included in the report.

We want to present this to him before Parliament reconvenes in early January. Would you please firstly indicate that you wish to take part and then return your considered answers in good time.

We consider it is vital, however difficult, that such valuable resigned/removed members should return to the fold,

Our cause is far more important than any personality clashes.

WHAT ARE THE OBSTACLES TO EX-UKIP OFFICE HOLDERS AND MEMBERS REJOINING?

The job of the Leader is laborious including control of administration, financial oversight, choice of personnel, media, etc. There are NEC meetings, election meetings, media appearances, travel to the regions. No wonder Nigel Farage said it was too much for him.

However, as the Party has wasted the last four years and is even more dysfunctional than it was in 2005 with substantially less members, things cannot continue as before.

This is an effort to find out precisely which matters are doing the greatest damage to UKIP and which areas need to be addressed urgently.

Specifically, what would encourage former key members to rejoin and stop others leaving?

I think Lord Pearson is well respected by the great bulk of UKIP members and is regarded as principled and well connected. His political history shows he puts principle above personal advancement.

There are two question marks:

1. His involvement in perfectly legal but ethically uncertain claims for expenses, etc. He is, of course, far from the only MP, peer or MEP to be involved in this.

2. His imperfect and narrow knowledge of the mechanisms and personalities in UKIP.

So the question here is, do you have any objection to the new Leader as a person?

Few office holders of members left UKIP because of the broad thrust of its policies although there may be disputes over details.

In recent times, UKIP has added a questioning attitude to climate change policies on a global and national scale. It has also added a more severe criticism of Islam (especially via Lord Pearson). This latter is, of course, the standard position of Christian Europe throughout the ages and in recent times such varied figures as Gladstone and Churchill have voiced similar concerns.

UKIP certainly needs to put out policy papers on climate change scepticism and Islam but they seem to be natural follow-ons to its patriotic, self-government core stance.

The question is, do you have any major disagreement with UKIP political policies?

I think it is reasonable to say that most ex-members and ex-officials left the Party because of governance issues. These are varied but I will try to group them as follows:

3. The failure to adhere to the Constitution.

ii. Misbehaviour by the NEC in suspending/removing members of the NEC.

iv. Improper elections. For example, the Returning Officer’s report on the elections for the EU candidate list was overruled.

v. The offer to ‘stand down’ or ‘disband’ the Party at the next general election was made without authority and was contrary to Clause 3.1 of the Constitution.

vi. Suspension of members on flimsy allegations of BNP links.

vii. The conduct of the Discipline Committee.

viii. NEC members have not carried out their constitutional role in having full debates with all relevant information. Some members appear to be ignorant of their responsibilities and are happy to be sidelined.

4. Misbehaviour in governance by the former Party Leader and others or usurpation of power by them.

i. The conduct of the Electoral Commission investigation, failure by the Party to adhere to the rules which it had done under previous Treasurers and the outcome being massive losses and legal costs. Failure by the NEC to control the process. Alan Bown is said to have openly said he will not honour his guarantee. Why?

ii. The failure to establish a UKIP media office. There is only a press office of the Brussels party which is appointed by and reports to Nigel Farage.
There is no system for distributing media enquiries. In any case, the media office should be directed by the Party Leader not from Brussels. Wherever possible, media appearances should be prepared with briefings. In the ‘disbanding’ storm, Malcolm Pearson and Nigel Farage gave contradictory statements to the media and there was no agreed written note of what the ‘offer’ was.

iii. There are no transparent systems of appointing Party staff, nor is there a published list of staff, their responsibilities or their reporting line of control.

Which of the above matters, or any other matters, do you think MUST be corrected before you would rejoin?

The relationship of the MEPs to the Party and their behaviour has always been dysfunctional.

5. There are no clear cut rules about publishing expenses.

6. There is no code as to what part of their salary MEPs would give to the national party on a continuing basis.

7. There is no code about MEPs’ attendance.

8. The procedure for appointing Brussels’ staff is opaque, probably no references are ever checked.

9. There is no financial reporting of the Brussels’ operation to the NEC. (It will be recalled this infusion of cash and resources is put forward as the main reason for having MEPs.)

10. There is opaqueness about who is employed by the MEPs or the group – Croucher? Fuller? Who knows? Who does Andreassen employ?

11. Apart from the doubts regarding her appearance on the MEP candidate list, the promise by Labour and Tories to enact laws not allowing MPs and peers to be non-domiciled will throw the position of Marta Andreassen into doubt.

12. There have been constant media stories about personal misbehaviour by MEPs in Brussels with no action taken.

Which of these matters MUST be corrected before you would rejoin or are there other matters?

Are some problems beyond institutional repair and are simply a reflection of insecure people at the top of UKIP – the lack of officer qualities?

13. The entrapment of Haslam, the former Treasurer.
14. Attempts to smear people with BNP connections.
15. Bullying behaviour.
16. Secrecy.
17. The constant desire to evade the constitutional norms.

It is worth noting Samuel Pepys, founder of the Navy, commented “A person who cannot say no is not fit for public service”.

Do you think UKIP suffers from the wrong kind of personalities or do you think institutional order will solve its problems?

In order to tabulate responses, it would be helpful if you would categorize your responses under the headings above.

There may be matters missed out in each section or not mentioned at all which you think are critical.

Please feel free to note these under the relevant section or at the end of your reply.
Posted by Junius at 08:30

Where can one find the 'attached template' and to whom should it be sent??