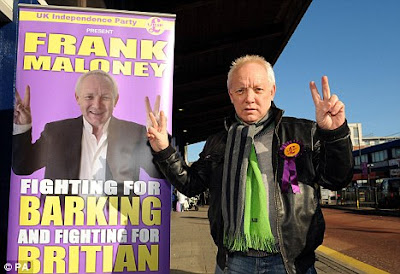 We all know that Frank is not the sharpest knife in the box. But why is he so keen to tell everyone? So where is 'Britian'? Is it next to 'Frunce'?

We know that the name of the town is Barking but did he have to take the name to heart?

In an effort at damage limitation Frank desperately tried to claim that it was all part of a cunning plan to get publicity. But did he get the idea from Blackadders's Baldrick?

He certainly is getting LOTS of publicity, but not the kind that will make people want to vote for him!

Frank famously caused a few problems for UKIP during the 2004 London mayoral election. He commented that he would not campaign in Camden because there were "too many gays". He later justified his remarks, telling the BBC "I don't want to campaign around gays...I don't think they do a lot for society...what I have a problem with is them openly flaunting their sexuality."

James Davenport, chairman of Gay Conservatives called for Maloney's resignation as UKIP candidate, saying "Frank Maloney is a dangerous extremist and should resign or be sacked as UKIP's candidate for London mayor. UKIP must back or sack their homophobic candidate."

Boxing promoter Frank Maloney has launched his campaign to become an MP – with posters spelling the word Britain incorrectly.

However, UK Independence Party candidate Mr Maloney, below, claimed the mistake was a trick to get voters’ attention.

‘I did that on purpose to see how many people pay attention,’ he added. ‘It causes interest. It means people start talking to you.’

He said he had used the same trick on promotional posters for boxing contests. Mr Maloney, who will stand in Barking, East London, at this year’s General Election, said: ‘I am concerned about the way the country is going. You can’t just sit on your backside and do nothing. I have every intention of winning.’

The error comes a week after Republican Scott Brown won the Massachusetts US Senate seat after his rival spelled the state’s name incorrectly.

From the Sunday Mirror:

Boxing promoter Frank Maloney launched his campaign to become an MP yesterday - with a spelling mistake on his posters.

"It creates interest - people start talking about you," he said. "I used the same trick on boxing posters."

And from The Scotsman:

Maloney said the misspelling was deliberate. "I did that on purpose just to see how many people pay attention. It causes interest." He said he joined UKIP as he believes "Britain should control itself and run its own borders and decisions should be made from Westminster".

Nick Griffin, leader of the BNP, is expected to be among Maloney's rivals for the London seat.

To view the original: LINK

And here's what the great British public think:

So he thinks he is bright enough to become an MP. what an idiot.
- Liz M, London.

By offering to disband UKIP if the Tories gave an election it proved that UKIP are merely a tool to reduce the BNP vote. A vote for UKIP means nothing.
- Ian, North Lanarkshire.

He probably can't read or write in his own language and now he wants to live on tax payers money. Clever,isn't he?. Better stick to boxing, old man.
- John Span, London.

It easy to claim the spelling mistake was a trick to get voters' attention after it was pointed out to you.

When he challenged Nick Griffin in a boxing match (Winner Takes All) I realised the man's a moron and doesn't belong in politic's.
- James, Bury.

What baloney, it is misspelt! I have heard this excuse many times when someone gets it wrong. I figure if they can't get the spelling right they won't get the other stuff right. And I certainly won't be interested in talking to them either.
- Ella, Exeter Devon.

To see the originals: LINK

Oh dear! Frank claiming that the spelling mistake was deliberate is not fooling them.

Better think of another excuse!
Posted by Junius at 16:23